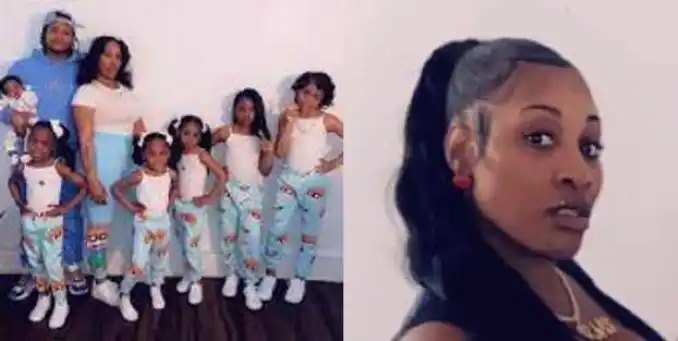 A 32-year-old mother, Ashley Lockhart who was found dead inside a gold Honda Odyssey that was parked on the side of a road in West Philadelphia was allegedly murdered by the father of her children.

The young mother who has six little girls with the suspect was found stabbed to death on Saturday, August 6, 2022.

Although police did report that a 34-year-old male person of interest was in custody, no charges have been made despite the fact that a weapon was found at the site. This person of interest is thought to be Ashley Lockhart’s boyfriend, who is also the presumed father of her children.

A picture of Lockhart and her six girls, who range in age from five months to ten years old, and a man who appears to be her boyfriend and the alleged murderer has been circulating online.

While the motive for Ashley’s murder has not been established, it is believed that domestic violence was a factor and that Ashley had previously been subjected to abuse by the father of her children.

According to a state representative, Lockhart lived with her boyfriend just a few blocks from where her body was discovered and was subject to a protection from abuse order against him.

The victim was stabbed 18 times across her body and face as seen on surveillance video as the man thought to be her boyfriend seemed to abuse her after jumping into the car.

The incident was so horrifying, that the knife was still lodged inside of the victim’s head when police arrived on the scene.