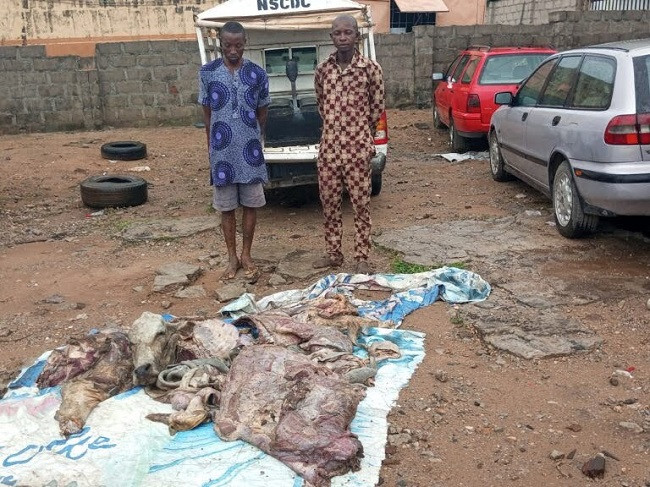 The Kogi State Command of the Nigerian Security and Civil Defence Corps (NSCDC) on Thursday paraded two suspects, for attempting to sell a dead cow.

The Suspects, Omachi Yakubu 26 and Salisu Abalaka 32 were arrested by Veterinary doctors working in conjunction with men of the Agro Ranger unit of the NSCDC.

The Kogi State Commandant, NSCDC, Oyinloye John Kayode, who made the disclosure in a press conference in Lokoja, said the cow was certified unfit for consumption by the Veterinary doctors.

The Commander said the duo were arrested following a tip-off by his officers and men, who swung into action.

It’s very unfortunate that the two suspects attempted to sell a dead cow whose cause of death was unknown for public consumption.

“We suspected that the suspects picked the dead cow from where it was probably discarded, with the attempt to resale to meat sellers at Felele Abattoir.

“But having been certified as unfit by the Agro Ranger unit of the Command, chemicals were used to destroy it and keep it away from the innocent public, ” he explained.

Kayode, however, urged members of the public to be wary of the kind of meat they buy in the market so as not to get poisoned.

The Commander also charged the public to endeavour to report any case of suspected meat not certified fit for consumption to the appropriate authorities.

He assured that as soon as investigations on the incident was concluded, the suspects would be charged to court and prosecuted.

The NSCDC Commander warned that the corps was fully ready to battle miscreants in the State.