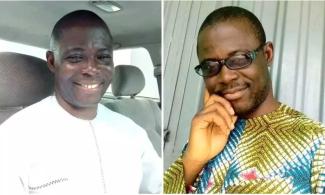 A Pastor with a yet-to-be known church identified as Busari Shuib Olawale Peter has been shot dead by gunmen.

It was gathered that the pastor was shot dead by gunmen suspected to be armed robbers in Oyo state.

A source who is familiar with the incident said the pastor who owns a shop in Ibadan was in the process of opening his shop in the early hours of today when the gunmen attacked him.

The source further narrated that the gunmen shot him at the back in front of his shop before making away with his valuables.

The deceased is survived by a wife and a daughter.

Meanwhile, friends and family have taken to social media to mourn him. One wrote:

“We were having our morning devotion around past 7am this morning when we heard two gunshots outside the house.

“So, we finished praying and I stormed outside the house ASAP.

“It turned out that robbers have shot one of the kindest people I have ever met in my whole life.

“They had robbed him and shot him to death in front of his shop.

“He was one of my earliest Facebook friends on this space and he had even sent me money severally when I was in 100L and needed financial help.

“He has sponsored people’s JAMB fee through me.

“Since we’ve known each other from Facebook and I got to know he has a POS shop in my street, I withdraw from him a whole lot and he doesn’t even collect charges from me.

“Even if he would, it’s very rare.

“His customer service is the best I have seen in life.

“Gave me a Christmas gift last year for being a good customer.

“When I saw that he was dead, I came to Facebook to see that he had posted on Facebook just 1 hour ago. Lol.

“That’s how it happens?

“What’s the essence of everything? Of every struggles?

“Why do bad things have to happen to good people, God?

“I haven’t felt grief in a long time, but this one touched me.

“This one touched me in unexpected places.

“Could have been a lot of people, not Pastor Busari.

“You didn’t deserve to leave this world this way, but like the liars would say “God knows best.”

“I am happy that you knew God, loved him, preached him and held him dearly.