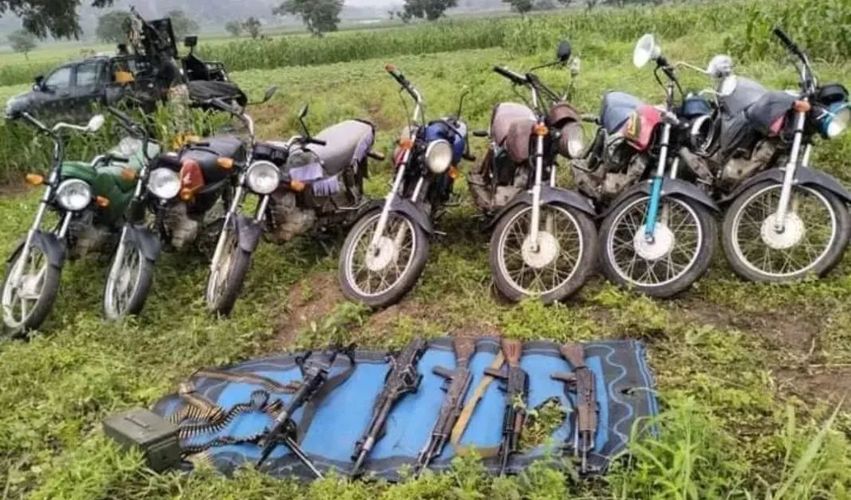 Officers of the Nigerian military have inflicted heavy casualties on armed men suspected to be bandits in Kaduna state.

It was gathered that the operation was carried out by troops of Operation Forest Sanity during a clearance patrol in Chikun Local Government Area of the state.

A military source said scores of the terrorists were killed during the raid, he also added that weapons and motorcycles were recovered from them.

The source said the operation was successful without any casualty on the side of the security officers, comprising troops and a team from the Civilian Joint Task Force, CJTF.

The development was confirmed in a statement released by the Commissioner, Ministry of Internal Security and Home Affairs, Kaduna State, Samuel Aruwan.

“Security forces recorded a major success in ongoing operations against terrorists, as scores of bandits were neutralized by ground troops and air assets during an operation in Galbi, Chikun local government area.

“This was conveyed in an operational feedback to the Kaduna State Government from the security agencies.

“According to the feedback, troops of the Operation Forest Sanity supported by assets of the Nigerian Air Force conducted clearance operations on an identified terrorist enclave in Galbi general area.

“During their advance, the security forces crossed River Kaduna and ran into stiff resistance from the insurgents.

“After a fierce firefight, scores of terrorists were confirmed neutralized as the military forces prevailed.

“The Kaduna State Government expressed excitement at the feedback, and praised the troops for their tenacity in this significant victory against the enemy forces.

“The Government thanked the troops, air force crews, police personnel, intelligence operatives, and local vigilante members who contributed to the success of the mission. The Government urged the security forces to increase the momentum and vanquish the terrorists for good.

“Troops will continue clearance operations in the general area, and other identified areas of interest across the state.

“The Kaduna State Government hereby encourages residents to volunteer useful information on activities or movement of terrorists to security agencies.”