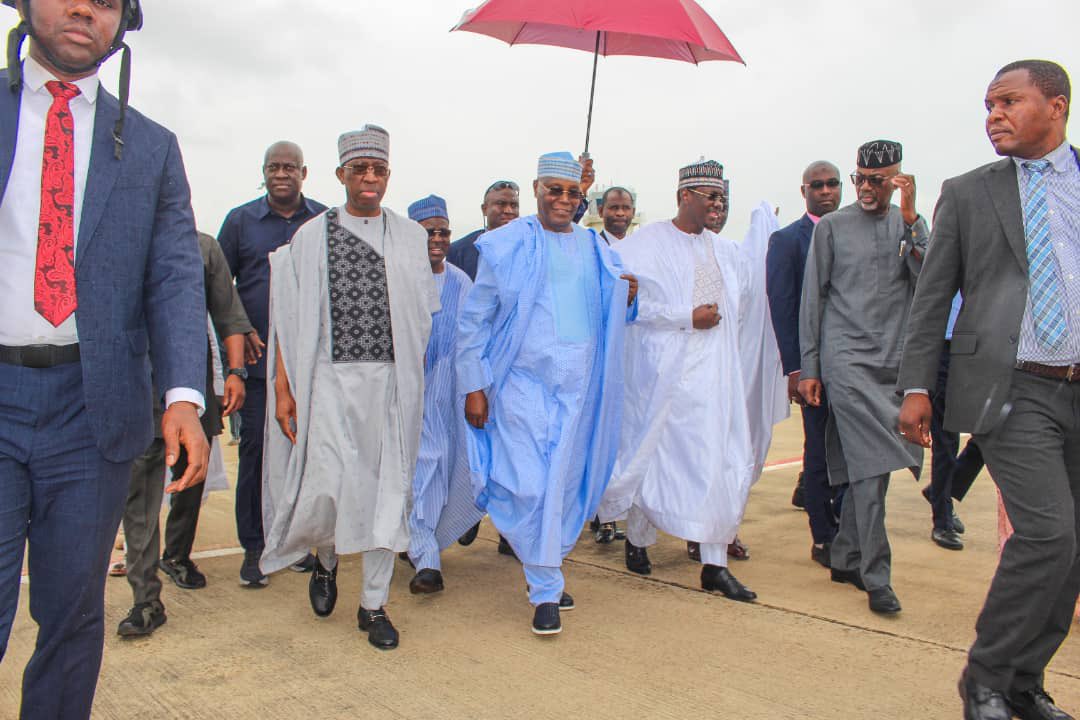 A mammoth crowd has turned out in Yola, the Adamawa State capital, to welcome former Vice President Atiku Abubakar, who is returning to the state for the first time following his nomination as the presidential flagbearer of the Peoples Democratic Party for a second straight time.

The arrival of the ex-VP was preceded by his running mate, Delta State Governor Ifeanyi Okowa, who was received by his Adamawa State counterpart, Ahmadu Fintiri, and other top government functionaries.

Atiku’s flight marked T7-AAA shortly afterwards touched down at at exactly 11:53am, disembarking to rousing welcome by supporters who breached protocol, as they thronged the tarmac to receive the PDP presidential candidate.

Motorists in the state capital had a hard time finding their way through the snarl of traffic, which enveloped the city, as residents in celebratory mode trooped out in their thousands to welcome the former Vice President.

The road leading to and from the Yola International Airport was the busiest our reporter observed. But it became even harder for Atiku’s motorcade and convoy making its way to the palace of the Lamido of Adamawa, HRH Barkindo Mustapha, in Yola town, where he was expected to pay homage to the royal father, before a scheduled condolence visit to the mother of the late OPEC Secretary-General, Sanusi Barkindo.

Residents lined up the streets to welcome Atiku back to his home state.

One resident speaking on Atiku’s nomination told The PUNCH that, “Everyone is happy with his feat at the PDP convention, many who thronged out today came to welcome him because they feel he is the president in-waiting.”

Another resident, Mustapha Saidu, said “Everyone in Adamawa is happy to see one of our illustrious son on the cusps of making history. Everyone has come to show that this time around they will stand with him and I strongly believe he’s the next president.”

The PUNCH reported that a celebratory reception in honour of the former Vice President to mark his emergence as the presidential flagbearer of the PDP was due to be held on Monday, August 15, in Yola.

Atiku is expected to also welcome defectors from other political parties to the PDP, and also have a handshake with 1,615 APC defectors who surrendered their APC membership card in the Toungo local government area of the state. The defectors were received by the PDP state chairman, Tahir Shehu, and other members of the state working committee.

According to the Adamawa State PDP secretary, Idris Yahya, in an interview with The PUNCH, three APC state legislators, who defected to the PDP, will also be received by the former Vice President.

Revealing the identities of the lawmakers, Idris said, “The first is the member representing Mubi North, Musa Shuaibu, and the second is member representing Furore/Gurin Alhaji Shuaibu Baba’s. The third we are still finalising and his identity will be unveiled on Monday.”