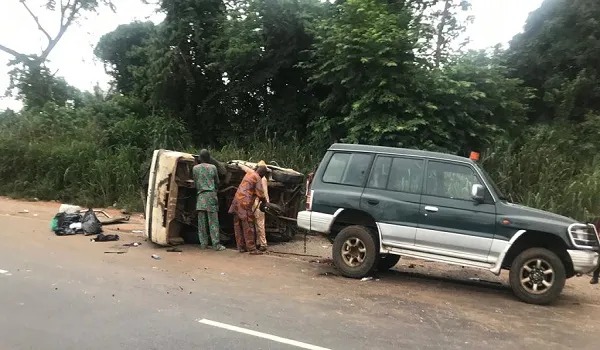 It was learnt that a bus conveying 15 of the RCCG members had engaged in excessive speed, defying passengers’ call for caution.

It was gathered that the bus marked APP 297 YC, suddenly had a burst tyre, lost control and somersaulted.

The Ogun State Traffic Compliance and Enforcement (TRACE) Corps confirmed that the accident occurred at Day Waterman College axis of the Abeokuta–Kobape–Siun road around 5:22pm.

Also, the spokesperson of the Federal Road Safety Corps in Ogun, Florence Okpe, said nine female adults, four male adults, one male child and one female child were involved in the crash.

While saying 10 persons were injured (eight female adults and two male adults), Okpe added that the male and female kids were rescued unhurt.

The three dead victims, according to her, were two men and one woman.

“The suspected cause of the lone crash was excessive speed when approaching a dangerous bend which led to loss of control.

“The injured victims were taken to State Hospital, Ijaye Abrokuta, for medical attention and the corpses were deposited at the same hospital’s mortuary,” she said.