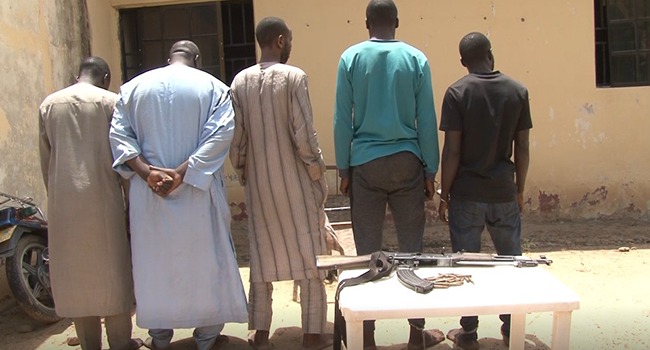 Police in Yobe state have paraded two suspected soldiers and three others in connection to the alleged murder of Islamic cleric, Sheikh Goni Aisami-Gashua along Gashua-Kano road in the state.

Police spokesperson Dungus Abdulkarim said the suspects will be charged to court.

The principal suspect, Lance Corporal Gabriel, admitted to the crime and explained how he killed the cleric and seized his car.

The army had earlier said a board of inquiry has been set up to unravel the circumstances around the unfortunate incident.

According to a statement signed by army spokesperson Kennedy Anyanwu, any soldier found wanting will face the wrath of the law.

“This incident is highly regrettable given the Sectors disposition and zero tolerance on violation of Code of Conduct and Rules of engagement for troops,” Anyanwu said,

It  was reported the killing of Sheikh Goni Aisami-Gashua on Saturday.

The cleric was said to be travelling from Gashua to Kano when he was followed in a bus by the attackers.

Some Gashua residents told Channels Television that the incident happened around 10am at Jajimaji, a distance of less than 30 kilometers away from Gashua, the hometown of the Senate President, Ahmad Lawan.

Police spokesman in the state, DSP Dungus Abdulkarim, in a telephone conversation with our correspondent said suspects wielding AK-47 rifles had been arrested and were in police custody.

Gashua has been one of the most peaceful communities in the state, even at the peak of the Boko Haram insurgency.