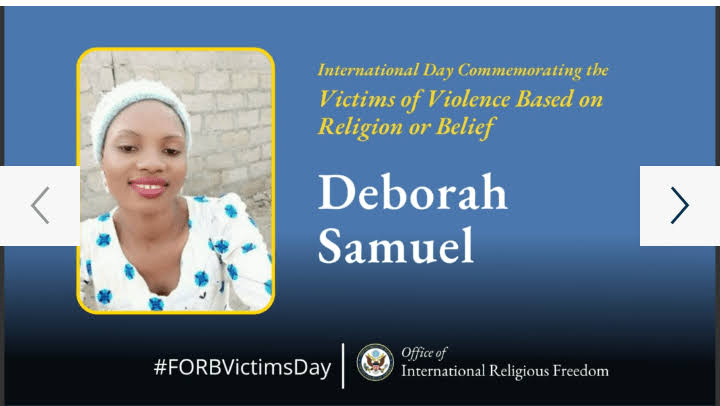 The United States Government has honoured Deborah Samuel, the 200-level student of the Shehu Shagari College of Education (SSCOE), Sokoto, who was stoned to death on campus by some Islamic extremists for blasphemy on May 12.

Deborah’s picture was uploaded on the website of the US Office of Religious Freedom, which is saddled with the responsibility of promoting universal respect for freedom of religion or belief.

This was done to mark the fourth US International Day Commemorating the Victims of Violence Based on Religion or Belief on August 22.

“In May, a mob brutally stoned, flogged and burnt to death college student, Deborah Samuel, in Nigeria, in an attack fuelled by hatred and blasphemy allegations, even as authorities attempted to stop it,” the office stated on its website.

“We honour her life as we continue the work to end such vicious violence.”

In a series of tweets on Tuesday, Rashad Hussain, the US Ambassador-at-Large, who heads the office, stated that too many people around the world who face violence based on their religion or belief are not heard because oppression keeps them hidden from view or it is too dangerous for their names to be shared.

Anthony Blinken, the US Secretary of State, also stated that the failure to protect the right to freedom of religion or belief threatens the enjoyment of this right by all.

“Religious freedom is a key element of an open and stable society. Without it, people aren’t able to make their fullest contribution to their country’s success,” Blinken noted

“Whenever human rights are denied, it ignites tension and breeds division.”