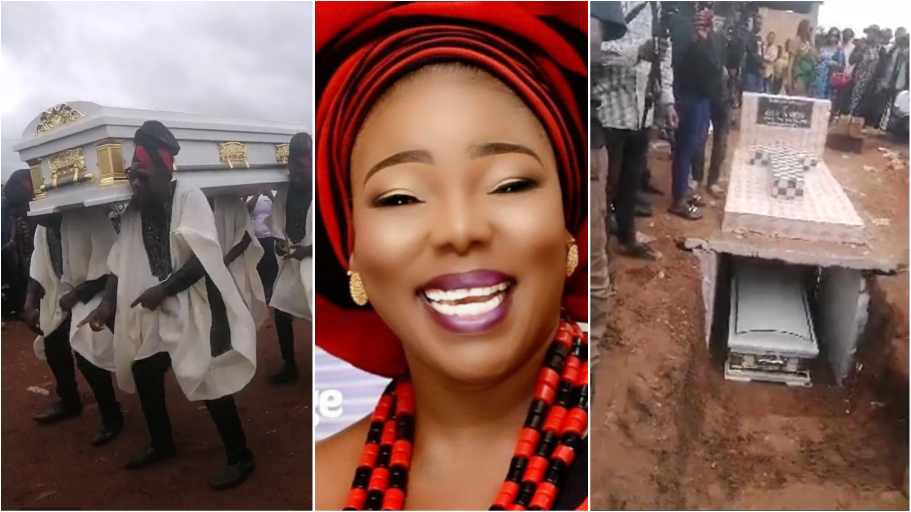 KFN reported hours ago that Ada Ameh died on Sunday, July 17. She was said to have been a guest of an oil company toyshop and his family when she suddenly collapsed.

She was rushed to the Nigerian National Petroleum Corporation’s hospital but passed on before they arrived the facility.

The remains of late veteran is set to be laid to final rest today, August 26.

Her colleague, Charles Inojie who played the role of her on screen husband in popular Nigerian Comedy TV series, The Johnsons shared a video of Ameh in her casket set to be buried in her hometown.

He captioned his post: IT’S A WRAP FOR ADA AMEH. There lies a chip of us Deadpan and ice-frozen. There lies a broken heritage. Wrapped in a funeral encasement. In that air-tight wooden bed. Is our naked truth. No matter the differences we nursed. You can never tell. How much of us is in them. There again is a grim call. A charge to everyone. That none is promised tomorrow. That we may live today as the best of days. Spreading love beyond the bounds of our comfortable thresholds. Till the twilights dim on the hour not foretold. When the once sonorous symphony. Fades forever away. On the morbid horizons. Of life’s curtain fall.”

In a new update, Empress Njamah has shared photos and videos from the ongoing funeral in Ogibia, Benue State.

The atmosphere was filled with tears as many wept over her death.

Recall that Kemi Filani had reported that according to Ada Ameh’s Obituary poster, on August 19, there was a novelty match in her honour at Nathaniel Idowu Pitch, Oregie, Lagos, as well as a candlelight procession at Teslim Balogun Stadium on same day.

While on Thursday August 25, there was yet another candlelight service at Saint Mary’s Primary School, Ogobia, Benue State.

This was followed by funeral service and internment at her father’s compound in Otupko Local Government of Benue State.

Her Obituary poster had left her family, fans and colleagues in tears.

Ameh, who played the role of Anita in the movie ‘Domitilla’ in 1996, was famous for her comic characters, especially in the series The Johnsons.

See more photos and videos below…