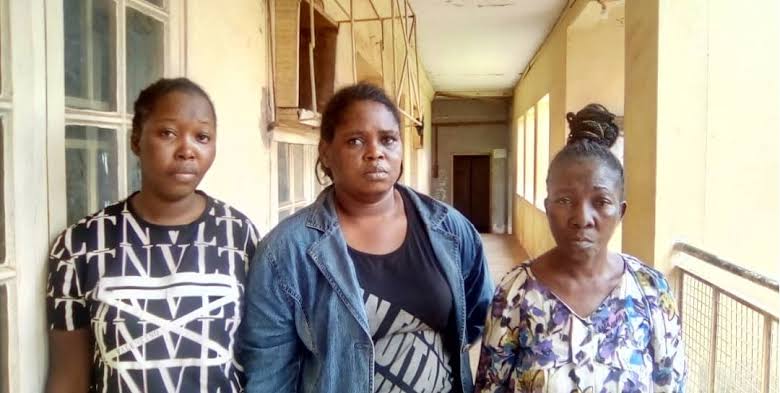 Three ladies have been detained by Enugu State Police Command operatives on suspicion of selling off newborn twins and killing the babies’ mother.

The suspects identified as Ukorie Cynthia, Onyia Pauline, and Aroh Ijeoma, were arraigned in court and remanded in Enugu Correctional Custodial Centre.

Disclosing this in a statement, the spokesperson of the command, DSP Daniel Ndukwe said the suspects conspired and sold the newborn twins for N3m and gave the mother, Chinenye Odoh, the sum of N1.8m.

The PPRO said when she discovered that her babies were sold for N3m, contrary to the amount (N2,350,000.00) she was told, Odoh demanded for the balance.

“Following the consolidation and conclusion of investigations into a case of conspiracy, children trafficking and murder, the State Criminal Intelligence and Investigation Department of Enugu State Police Command has today, 26/08/2022, arraigned in court, one Ukorie Cynthia aged 25, Onyia Pauline aged 56 and Aroh Ijeoma aged 39, all residing in Enugu.”

“The suspects, who were arrested on 26/07/2022, by Police Operatives serving in Central Police Station (CPS) Enugu, were remanded in Enugu Correctional Custodial Centre, pending further hearing of the case.

“Their arrest was sequel to the receipt of a report alleging that they conspired and sold the newborn twins of one Chinenye Odoh aged 31, and thereafter caused her death by poisoning her food, when she realized that the suspects gave her an amount lesser than the total sum they sold the babies.

“Investigations revealed that Ukorie Cynthia accommodated the deceased in her house till she put to birth on 05/07/2022, while Aroh Ijeoma facilitated the sale of the babies by contacting Onyia Pauline, a Nurse, who brought a couple that bought the babies upon their birth at the sum of three million naira (N3,000,000.00).

“However, when the deceased eventually knew the exact amount they sold the babies, she demanded for the balance, but was thereafter said to have eaten a suspected poisoned corn given to her by Cynthia, leading to her death.”