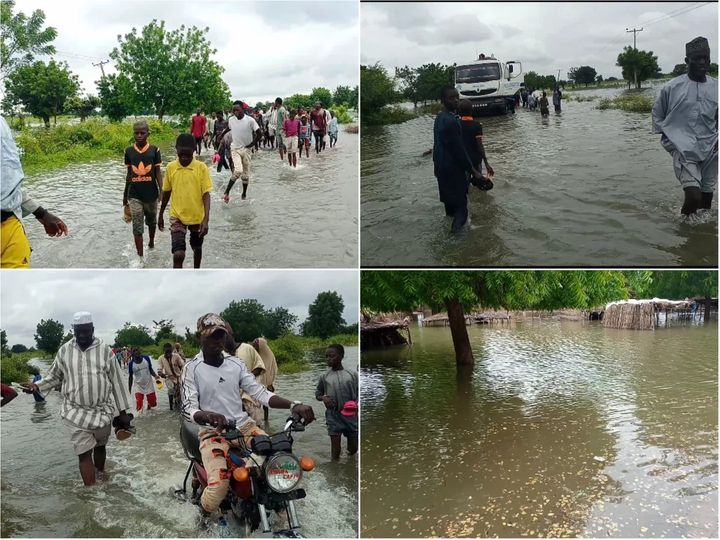 The Flood currently ravaging some parts of Jigawa State has taken over the Ringim-Kazaure road and threatens to sack the Sankara community in the Ringim Local Government Area.

Motorists and other road users were stranded, forcing them to go back and follow the alternative road to their destinations.

The road, which links towns like Babura, Garki, Kazaure, Gwiwa, Yankwashi, and Daura in Katsina State, was completely taken over by the flood.

He said the incident happened in the early hour of Sunday around 2:00 a.m. due to continuous heavy downpours, which led to the overflow of streams in the area.

He said the flood had taken over the road and resulted in the submergence of the market and other public buildings in the area.

He explained that the water was also making its way into the town, forcing residents to flee.

The Local Government Council chairman Hon. Shehu Sule Udi Ringim also confirmed the incident. He said over 1000 houses collapsed and thousands of farmlands washed away due to the flood caused by heavy downpours in the local government.

He said the local government had provided the empty sacks and sand for the embarkment of the area to prevent the water from getting access into the town.

Udi, however, appealed to the state and federal governments to come to the aid of residents and to support the victims of the flood.