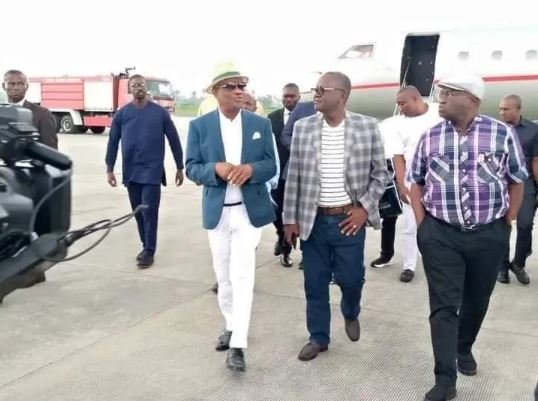 Although details of the Friday meeting have not been made public, political watchers believe it may be connected to the crisis within the PDP

Nyesom Wike, the Rivers State Governor, with his his Benue and Oyo State counterparts, Samuel Ortom and Seyi Makinde have met again in London.

Although details of the Friday meeting have not been made public, political watchers believe it may be connected to the crisis within the PDP

Recall that moves to reconcile Wike and Atiku Abubakar, whose relationship hit the rocks after the PDP primary election has continued to prove difficult.

Vanguard had reported that Makinde who has been on his annual vacation since the last meeting, was first joined by Wike, while Ortom who was on his way to the United States of America, made a stopover for the meeting.

It was gathered that the All Progressives Congress, APC presidential candidate, Bola Tinubu may join the PDP governors in the United Kingdom to conclude the previous meeting.

Wike lost the PDP presidential primary held in Abuja on May 28 to the former vice president, Atiku Abubakar.

His hope of emerging the party’s vice presidential candidate was also dashed when Atiku selected the Delta State Governor, Ifeanyi Okowa as his running mate.

The development has continued to spark fire from Governor Wike’s camp as he vowed to ensure that Atiku is defeated in the forthcoming elections.