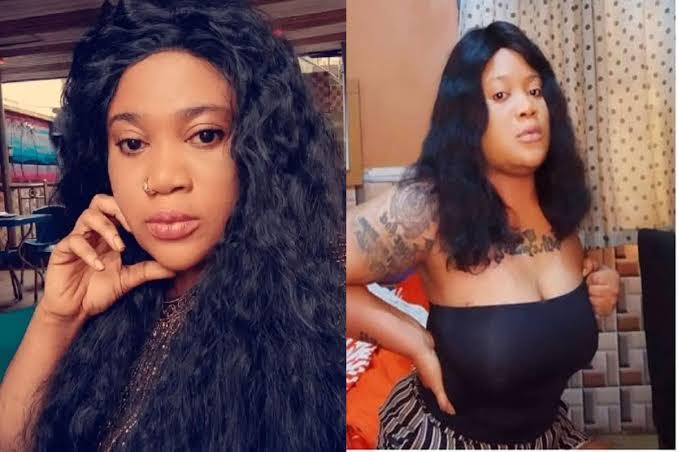 Esther Nwachukwu’s death was announced on her Instagram story a few hours ago.

The post urged followers to pray for her soul and her ailing mother.

A conversation between her cousin, who accessed the deceased IG account, and an Instagram blog called Ourtalkroom confirmed the report.

Remember that the actress came out sometime in October 2021 to explain why side chicks deserve the best from married men.

Side chicks, she believes, deserve the best from married men because they do all the work.

Esther Nwachukwu also stated that her message was not intended for side chicks dating broke married men.

Nollywood Actress, Esther Nwachukwu dies after allegedly drinking poison
Nigerians, on the other hand, mocked her for her assertion, with some wishing the same side chick would come to her aid in marriage and others saying she would remain a side chick forever.

A memo on the script interpreter’s IG story reads: “TO THE GENERAL PUBLIC, ESTHER SKY IS DEAD. KINDLY HELP US PRAY FOR HER SOUL AND TO HER SICK MOM”.

The rising actress also advised women to avoid dating Nollywood actors because they are “stingy.”

In a now-viral video, the brand influencer advised women who want to date entertainers to instead date musicians.

Nwachukwu claimed that Nollywood actors usually live a phony life and are always looking for free sex with ladies.

The actress also claimed that, unlike actors, musicians pay women better in relationships and are generally capable of caring for those they love.

“If you must have anything to do with an artiste, go for musicians, they pay better than Nollywood actors. Or just follow Yahoo boys so they can use you for money ritual.”