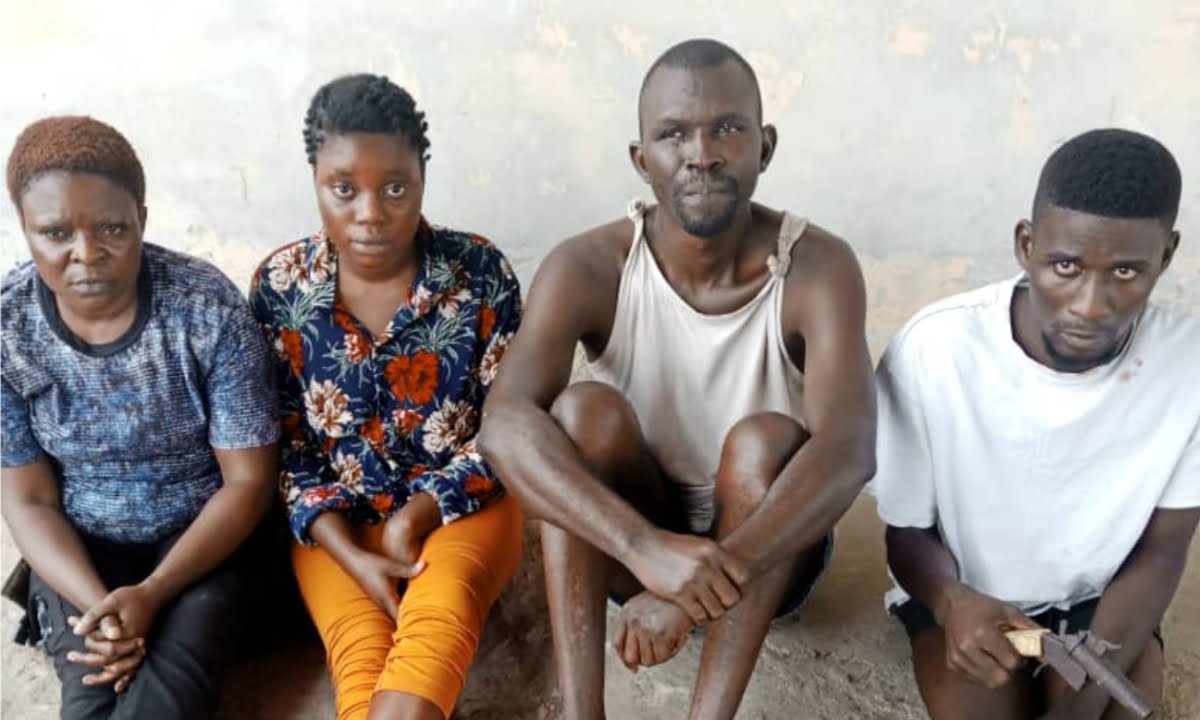 Operatives of anti-kidnapping Squad of the Akwa Ibom State police command had bursted a four-man child robbery and trafficking syndicate in Uruan Local Government Area of the State.

The Commissioner for police, CP Olatoye Durosinmi disclosed this over the weekend while parading the suspects, alongside others allegedly involved in various crimes such as kidnapping, murder, robbery, sea piracy, cultism, etc.

According to the Commissioner, investigations revealed that one Felix Edem, also known as “Black Bishop” ‘m’ and Joe Fineboy ‘m’ both of Idu Uruan abducted one Queen Ime of Ifiayong Usuk village in Uruan Local Government Area, with her children, aged three, as well as one and half from her house into their tricycle at Ikot Akpa Etok road in Ibesikpo Asutan Local Government Area.

It was further revealed that they murdered the woman, abandoned her corpse and absconded with the two male children and sold them to one Marius Obi ‘m’ of Abia State.

The statement added, “On 30th August, 2022 at about 0700hrs, Felix took Operatives of the Anti-Kidnapping Squad to Aba in Abia State, where the said Marius Obi was lured and arrested. During interrogation, he confessed to have re-sold the two children to his syndicate member known as Nwanyiocha ‘f’, address unknown.

“Furthermore, as at when Felix Edem was arrested at Nna Enin village in Uruan Local Government Area, a locally made single barrel pistol without ammunition was recovered from him which he confessed to using for his dastardly acts.”

The statement explained that Sampson beat his wife to a state of coma and she later died few hours after she was assaulted, adding that the scene of crime was visited and the corpse had been deposited to the mortuary for autopsy.

“On 25th August, 2022, one David Edet Okon ‘m’, and Peter Akwaowo Solomon ‘m’, both of Ini Local Government Area were trailed and arrested for the murder of one Saviour Stephen Okon ‘m’. Investigation revealed that the deceased was beaten to death for stealing a goat at Akpan Andem Market. Suspects confessed to the crime,” the statement added.

However, the Commissioner had warned perpetrators of crime to turn a new leaf saying that he would deploy adequate assets, both human and material to ensure that Akwa Ibom State is safe and secured.

Durosinmi, who said the suspects would be charged to court at the completion of investigations added, “today, I make bold to say that we are walking the talk as most felons have been kept at bay, thereby making Akwa Ibom State to remain a destination of choice for tourists and investors and one of the most peaceful States in the federation.”