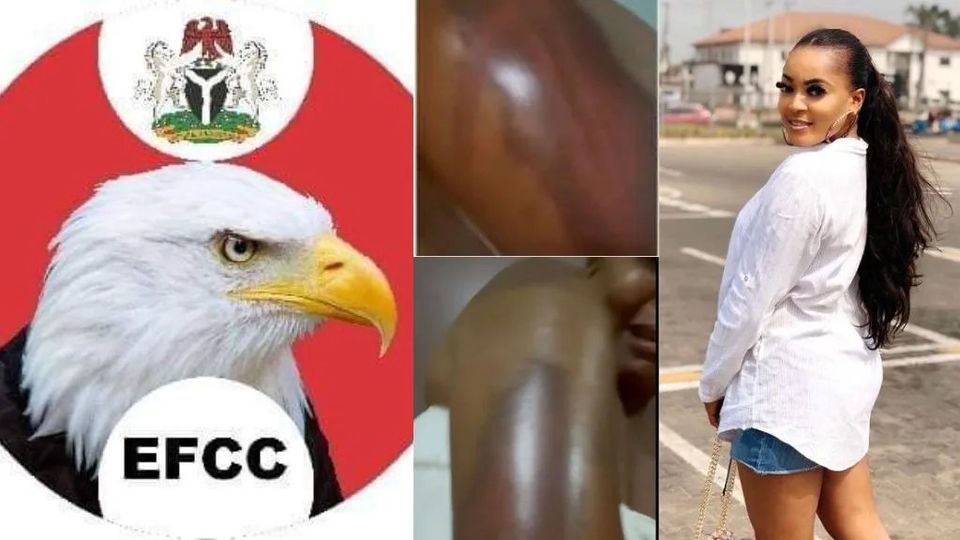 The Economic and Financial Crimes Commission, EFCC, has responded to the allegations made against it by actress Helen Duru.

The actress had posted a video of herself covered in blood with a shattered skull, while claiming that security personnel had tried to enter her apartment late at night. She also claimed that she was never a person of interest and that the attackers did not identify themselves.

She further said that the agents were beating her alternately. She claimed that while assaulting her, they chanted “yamiri” continuously and spoke Hausa language.

She wrote on social media:

“Ccs department Enugu Zonal command of the economic and financial crime commission (EFCC) did this to me . exactly 02:53 I heard noise in my compound , then I gently came out at my balcony to peep what it was , I saw some men but couldn’t identify them as it was still dark. When they saw me, they asked me to come down and open the staircase door which I ignored and hid. They had flash lights . They kept insisting I open the staircase door . I later went inside my house.

“Few minutes on ,I heard a boy screaming and crying for help. Then my neighbor called me to alert me. I told her I was awake , We both came out from our balconies ( She lives on the first floor) they men started shouting at us that we should go in or open the staircase gate. The next thing we heard they started damaging the staircase door and gained acces . I went inside my room and locked the door. Two men climbed to my flat, damaged my two doors, gained access into my house and started beating me. I got a slap first that made me shouted Jesus Christ . They spoke in Hausa language but all I could hear was “yamiri” the beating became intense as they beat me in turns , using a rod/stick ( don’t exactly know what that was ) all over my body . One picked my usb phone cord and descended on me.

“They kept speaking In Hausa as the beat me. I could feel the rage in them as I kept screaming Jesus . I feared for my life Then I ran into the bathroom and close the door. They try to push it down but the entrance was too slim for both of them. They left my room.
I thought they came on their own accord , once I noticed they left my room

“I tried to come down to inform whoever is their superior what had happened, another one saw me, without saying a word he took his instrument and repeatedly hit my head screaming “get out ,go up “ I tried to explain why I had come down but he made sure he repeatedly hit my head until I felt fluid dripping on my face . I wiped my face and saw it was blood. ( continue from the pictures )
Please me repost this until it gets to the right authorities”

Reacting, the EFCC describe the claims she made as false and misleading, the agency said:

“The attention of the Economic and Financial Crimes Commission, EFCC, has been drawn to an online video trending on Instagram, from the handle of a certain “@Iamhelenaduru”, a self- styled actress, purporting, quite mischievously, an assault by operatives of the Commission.

“Checks by the Commission, however, flagged Helen Aduru, an upcoming actress, as a mere publicity- seeking player, with a poorly- scripted claim that has fallen flat in the face of unassailable facts available to the Commission

“In her script, she was quick to include five names of officers she claimed came from the Cybercrime Section of the Enugu Command of the Commission. Characteristically, EFCC’s officers don’t wear name tags nor move around with bulldozer- shaped equipment to pull down security doors.

“Aduru claimed, rather strangely, that she was assisted by a little boy, to a Police Station at 3:44 am but met the station shut. It is important to note that Police Stations are not civil service ministries that “close” in the evening. Even more preposterous is the fact that she never went back, at daybreak, to lodge a complaint. More poignantly untenable is the fact that her purported assault of July 21, 2022, which has not been logged nearly two months later at the Police Station is only being brought to public glare on September 2, 2022!! Such a scene could only stand on a typical Nollywood fiction series.

“Such claims by Aduru, like all other stranger- than- fiction, click-baiting, sympathy-seeking ploys, do not merit a response but for the need to avoid “silence is acquiescence” stance of mischief makers. Deeper checks on the matter only showed that, certain blackmailers could be bandying some known names in the Enugu Zonal Command to settle some scores.

“The Commission, strictly guided by its Standard Operational Procedure, would not succumb to blackmail or any sleight of hand by any character. The poorly- scripted video would be further analysed for more forensic details and possible legal action to dissuade those who seem to be making an industry of falsely accusing and maligning the Commission. Members of the public are enjoined to ignore Aduru’s claims. EFCC’s officers are not assaulters or terrorists.”