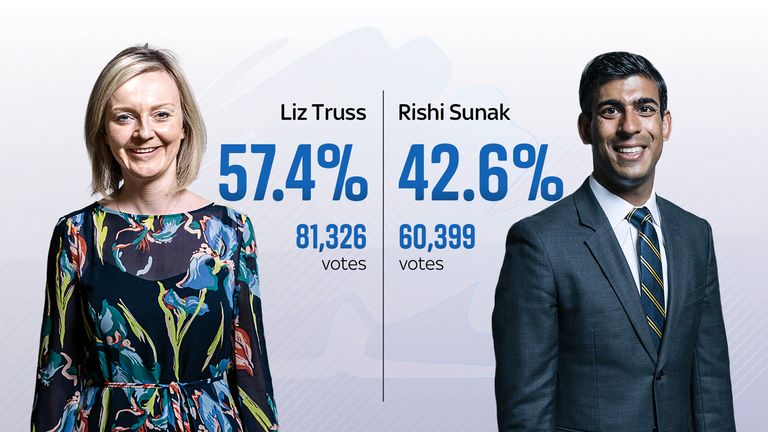 After defeating Rishi Sunak in the race for the Conservative Party leadership, Liz Truss will take over as the United Kingdom’s next prime minister.

As the presumptive winner of the election, Ms. Truss will succeed Boris Johnson on Tuesday and become the third female president of the country.

It indicates that even though the race was closer than some had anticipated, she won with a comfortable margin.

It is an “honor to be elected,” Ms. Truss said, thanking her party for holding “one of the longest job interviews in history.”

After the results were announced, she thanked outgoing Prime Minister Boris Johnson in a brief statement.

“You got Brexit done. You crushed Jeremy Corbyn. You rolled out the vaccine and you stood up to Vladimir Putin”, she said.

Mr. Johnson will formally present his resignation to the Queen at Balmoral Castle in Scotland after being obliged to do so after a good number of ministers quit his administration due to a number of problems.

Soon after, Ms. Truss will meet the Queen, who will extend an invitation for her to form a government.

Following her inauguration, Ms. Truss is anticipated to deliver a speech in front of No. 10 before starting to assemble her cabinet.