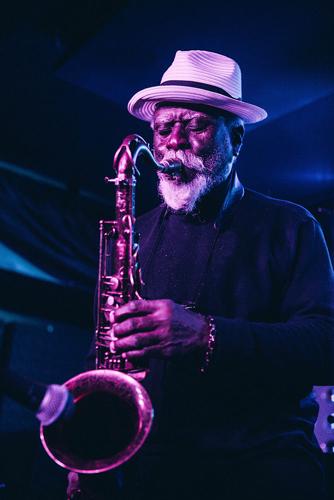 “We are devastated to share that Pharoah Sanders has passed away,” the label’s statement read. “He died peacefully surrounded by loving family and friends in Los Angeles earlier this morning. Always and forever the most beautiful human being, may he rest in peace.”

Born Farrell Sanders in Little Rock, Arkansas in 1940, Sanders’ career began in Oakland, California. After moving to New York in the 1960s, he started collaborating with Sun Ra, who gave him the name Pharoah, before becoming a member of John Coltrane’s band; Sanders played with Coltrane until the latter’s death in 1967.

Along with Coltrane, Sanders was a key figure in the spiritual jazz scene. His 1969 album Karma, which incorporated influences from traditional African and south Asian music, is considered one of the major early documents of the form. Throughout the early 1970s, Sanders continued to release records as a bandleader, largely on the Impulse! label. In 1971, he performed on Alice Coltrane’s Journey in Satchidananda, another milestone in modal and avant garde jazz.

After leaving Impulse! in 1973, Sanders released albums on Arista and the avant garde jazz label India Navigation, before releasing a run of records on the Theresa label in the 1980s.

Although his output began to slow in the 90s, Sanders continued to tour and collaborate throughout the 2000s. In the mid-2010s, Sanders heard a composition by the British electronic producer Sam Shepherd, AKA Floating Points, and asked to collaborate with him. The resulting album, 2021’s Promises, recorded in 2019 with the London Symphony Orchestra, was Sanders’ first new album in more than a decade, and was widely acclaimed.

Paying tribute to Sanders on Instagram, Shepherd wrote: “My beautiful friend passed away this morning. I am so lucky to have known this man, and we are all blessed to have his art stay with us forever. Thank you Pharoah.”

… as you’re joining us today from Belgium, we have a small favour to ask. Tens of millions have placed their trust in the Guardian’s fearless journalism since we started publishing 200 years ago, turning to us in moments of crisis, uncertainty, solidarity and hope. More than 1.5 million supporters, from 180 countries, now power us financially – keeping us open to all, and fiercely independent.

Unlike many others, the Guardian has no shareholders and no billionaire owner. Just the determination and passion to deliver high-impact global reporting, always free from commercial or political influence. Reporting like this is vital for democracy, for fairness and to demand better from the powerful.

And we provide all this for free, for everyone to read. We do this because we believe in information equality. Greater numbers of people can keep track of the events shaping our world, understand their impact on people and communities, and become inspired to take meaningful action. Millions can benefit from open access to quality, truthful news, regardless of their ability to pay for it.