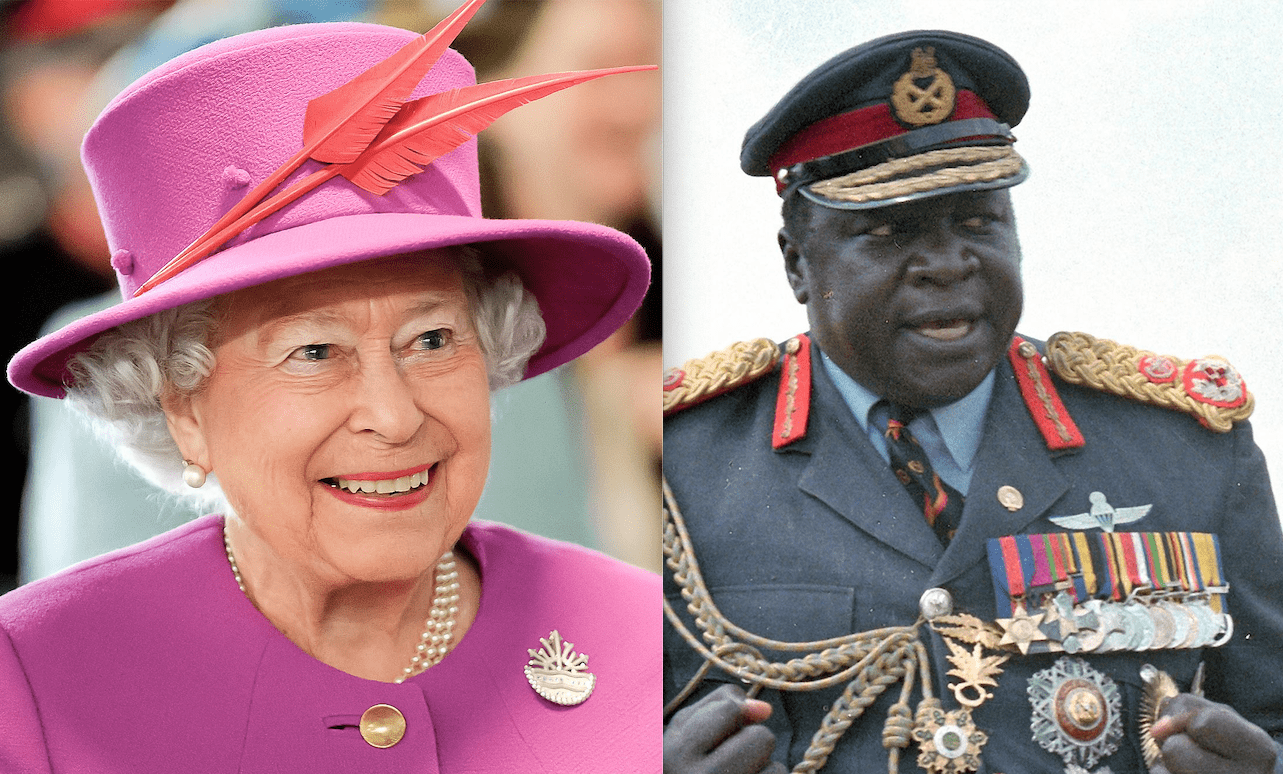 The Late Idi Amin Dada was funny and courageous man. He feared no body, except God/ Allah.

On 22 January 1975, He wrote to Queen Elizabeth II informing her of His plans to spend his economic war honeymoon in England.

Your Majesty,
You are no doubt kept abreast with the great strides in the economic fields Uganda has made sine I asked your authorities to assume responsibility over nationals of Asian extraction who had vowed to perpetually dominate and shape the economic destiny of Uganda for their own selfish and situational aims.

Since I gave the directive that non citizen Asian of British nationality return to their motherland, Britian, so much has taken place and so much has been said.

The economic war which we have been fighting tooth and nail has been honorably won. This is a fact, not a fuss.

We have encountered a parade of intricate problems on our road to economic independence and the consolidation of our political sovereignty. Now the dust is settling, or should I say, it has settled. I have now time to relax a bit. Consequently, I have decided to spend my economic war honeymoon in England on the 4th August, 1975.

Your Majesty, it is ardently hoped and expected that you will, through various agencies, arrange for me so that I can see and visit Scotland, Wales and Northern Ireland. I should like to use that chance to talk to these people who are struggling for self-determination and independence from your political and economic system.

As a revolutionary leader, I am prepared, when it is necessary, to advise on various liberation front’s and on ways and means of defeating not only real but also imaginary imperialism, racism and economic serfdom.

I shall also be obliged if arrangements are made for me to meet and exchange views with the non-citizen Asians of British nationality that I booted out of this country September 1972, because of our unequivocal determination to rid Uganda of economic slavery and loyalty to corruption

I shall be in a position to appraise them of the economic situation in the present day Uganda. I shall try not to forget to tell them that I do not regret their absence in Uganda at all as I knew, and I still continue to know, that their stay in Uganda was perpetually identified with systematic looting of our economy and a concerted effort to voraciously subjugate and frustrate efforts and intents of the black man to shape his own economic, political, cultural and social destiny.

During my stay in your country, I shall have a chance to meet my old colleagues and friends. Now that Uganda is beyond dispute, economically free and politically sovereign, my proposed visit to your country will be a good omen in the direction of normalizing relations between us the British. We are committed to safeguarding our political and economic independence zealously. Any tendencies, real, imaginary, distant or near, aimed at displacing the economic status quo in Uganda shall meet organized opposition from us.

As my former commander-in-Chief of the Kings African Rifles and Head of the Commonwealth of Nations, I wish you and the people of Britain, on behalf of people of Uganda and on my behalf, a happy and prosperous new year, long life and a bright future.

I am sending this message early so that you may have ample time to help you arrange all that is required for my comfortable stay in your country. For example, I hope there will be, at least during my stay, a steady and reliable supply of essential commodities because I know that your country is ailing in many fields.
I look forward to meeting you, Your Majesty.

Accept, Your Majesty, the assurance of my highest esteem.