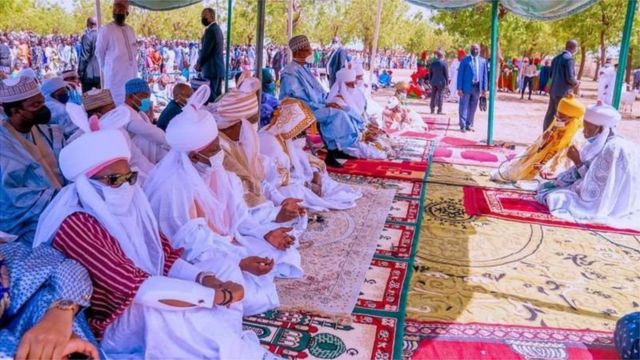 Pastor Yohana Buru, the General Overseer of Christ Evangelical and Life Intervention Ministry, led over 30 pastors and reverends to the venue of the occasion.

Over 30 pastors on Saturday, joined Muslim faithful to celebrate this year’s annual Maulud (birthday of Prophet Muhammad) as a mark of togetherness and peaceful coexistence between Christians and Muslims in Kaduna State.

Pastor Yohana Buru, General Overseer of Christ Evangelical and Life Intervention Ministry, who Led over 30 pastors and reverends to the venue of the occasion, held at Ahmadu Bello stadium, Kaduna on Saturday, said Maulud celebration provided the golden opportunity for Christians to meet, interact ,dialogue, discuss and exchange goodwill messages with their Muslims brothers in order to foster peace and unity in the country.

Buru congratulated the Sultan of Sokoto, Alhaji Abubakar Sa’ad as well as Sheikh Dahiru Usman Bauchi, Sheikh Ibrahim Yakubu Elzazzaky, and Khalifa Sunusi, Lamido Sanusi the leader of Tijjaniyya Islamic sect, and told them that they were in the stadium to also strengthen the good relationships between the followers of the two dominant religions(Islam and Christianity).

According to him, they (Christians pastors) want to find better ways of promoting peaceful co-existence and religious tolerance among the adherents of the different faiths.

“We must remember that we are created by one God, and we are the children of Adam and Eve, and we both have our holy scriptures (Bible and Qur’an) from One God which guided us on how to live in peace and harmony with each other.” he said

He called on Muslims and Christians to embark on ceaseless prayers for the nation while offering special prayers to all Nigerian security personnel for successful operations throughout the country.

Earlier, one of the Islamic scholars, Sheikh Tukur Abdulsalam, the Public Relations Officer (PRO) of Fityanul Islam of Nigeria emphasized on the need for peaceful understanding among the adherence of the two religions,calling on both Muslims and Christians to embrace the culture of forgiveness.

While commending Pastor Buru and his team for visiting them and joining them in celebrating the annual celebration, he said last year they equally participated and joined his church to celebrate the birth of Jesus Christ.