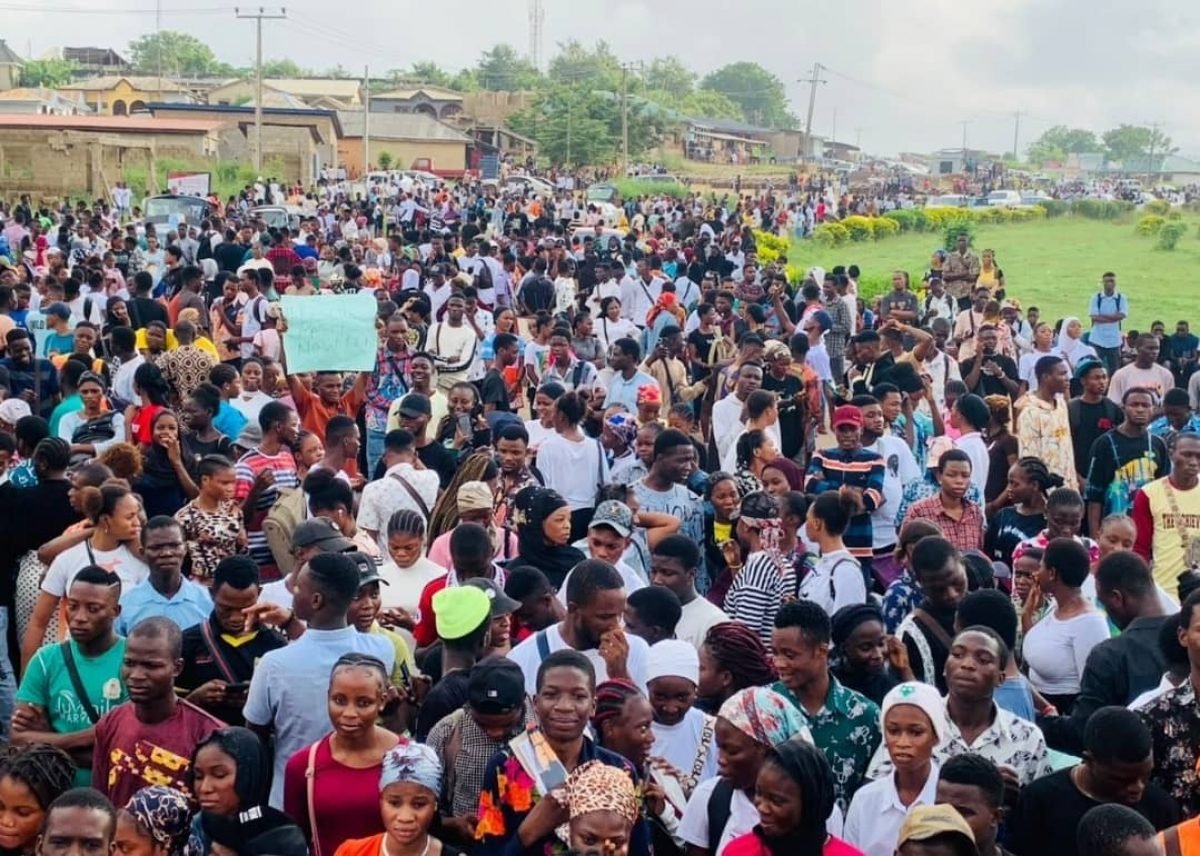 Academic activities were disrupted as students of Moshood Abiola Polytechnic including officials of National Association of Nigerian Students, NANS, Ogun Axis, took to the streets to protest an alleged hike in tuition fees by the management.

Though a peaceful demonstration, the action saw most of the students shutting down the entrance to the polytechnic, disrupting the ongoing second semester examinations of the institution.

Some of the students barricaded the gates into the school premises, preventing other students from gaining access to write their examinations.

They bemoaned the alleged increase in fees, stating that though the management had earlier hinged the increment on not having enough funds to run the institution.

The protesting students equally alleged that the management of the polytechnic mismanaged and diverted funds.

The protesting students were seen chorusing solidarity songs, holding placards with various inscriptions like ‘We no be rich kids, na why we come MAPOLY’, ‘#Say No To Unreasonable Increments Now !!!’, etc.

Addressing the media on behalf of the protesting students, the Chairman of NANS in the State, Damilola Kehinde, insisted that there must be complete reversal of the increments and introduction of new fees in the school.

Kehinde said, “We resisted this increment and came to a benchmark of reduction in the initially added amount after due consultation. The clear promise made to the students’ body by Dr Odedeji and other members of the management team is that there will no longer be an increment. At least, not in his own time as the Ag. Rector.

“Little did we know that he was only waiting for the state government to confirm his appointment as substantive Rector before unveiling his anti-poor policy to make MAPOLY unaffordable for the masses.

“There was no prior consideration of the economic conditions of parents and guardians, tuition fees were increased outrageously again for two consecutive sessions. This can best be described as the highest level of discomfort any management team could think of putting the students through.

“Ordinarily we could say the lack of funds to run the institution may be the reason for increasing tuition fee as claimed by the management, but how do we reconcile the fact that the same Dr Odedeji and few of his associates are buying generators, vehicles and other properties with and through the school resources, yet diverting it to be their private properties.”