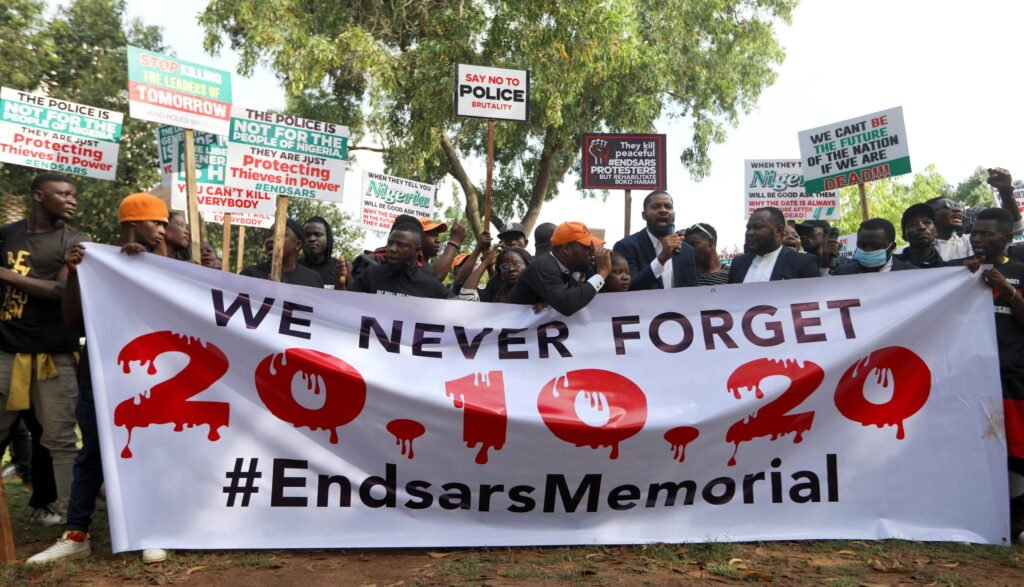 As the EndSARS nationwide protest that led to the death of scores of Nigerian youths enters its second anniversary, Nigerians have questioned the government’s sincerity towards its citizens, vowing that the gruesome event will affect the outcome of the 2023 general elections.

In fact, most Nigerians are of the opinion that the lives of the ordinary citizens does not (in any way) matter to those occupying government offices. They believe that politicians are only interested in keeping the power revolving around them and use the masses to climb to positions of power during elections.

Nigerians, mostly in the youth bracket, took to the streets during this period in 2020 to demonstrate police highhandedness, intimidation and cruelty against innocent citizens. They specifically demanded the ban on the Special Anti-Robbery Squad, SARS, unit of the Nigeria Police.

The protest, which started calmly and peacefully across the country, was hijacked by thugs who began to destroy government facilities and inflicted injuries on the protesters.

The climax of the protest was when soldiers of the Nigerian Army were deployed in trucks and allegedly opened fire on the peaceful protesters.

By the order of military hierarchy “the soldiers invaded the Lekki tollgate on October 20, 2020 shot, injured and killed unarmed helpless and defenceless protesters, without provocation or justification, while they were waving the Nigerian Flag and singing the National Anthem” thereby committing a massacre, a judicial panel of inquiry set up by the State government found.

The panel also found that officers of the Nigeria Police Force who were deployed to the toll gate on the night of the incident “shot at, assaulted and battered unarmed protesters, which led to injuries and deaths,” thus aiding the army in the commission of a massacre on unarmed civilians.

The findings of the panel, which was released in 2021, put to rest repeated denials by the Army, the Nigerian government and the Lagos State government that a massacre was committed by the soldiers of the 65 Battalion of the 81 Garrison Division, Bonny Camp, led by Sanusi Ovada Bello, a lieutenant colonel.

The panel submitted two reports — one on police brutality cases and another on the Lekki incident investigation.

However, this was subject of controversy, especially with the Federal Government rejecting the panel report for inconsistencies.

And evoking the negative memories of the event recently, Musiliu Akinsanya, popularly known as MC Oluomo, had insisted that no lives were lost during the Lekki tollgate gate incident.

Oluomo, who serves as the Chairman of Lagos Parks and Garages Management, made this claim while addressing supporters of the All Progressives Congress, APC, during their 5-million man march to support the candidacy of Asiwaju Bola Ahmed Tinubu, in Lagos on Sunday.

The transport boss argued that it was not possible that there would have been killing of protesters and the corpses would not be found nor would the families of the deceased coming out to ask for their loved ones.

And as celebrities and organizers of the 2020 EndSARS protest concluded plans to hold a memorial in the Lekki area of Lagos State on Thursday, Nigerians on the streets of Abuja have expressed concerns over government’s insincerity to the populace.

The march is to commemorate the death of citizens, particularly youths who were allegedly massacred by the Nigerian army, at the Lekki Tollgate on Tuesday, October 20, 2020.

Speaking on this matter, Bundesaan Terdue, a Lagos-based security expert, who has followed the EndSARS incident from the very beginning, said “It is unfortunate that no one takes responsibility for a disaster such as this. This is over two years after innocent citizens were killed no one whether in the army or in government have been made to pay.

“This government has been insincere. The people who were massacred, I say may their souls continue to rest in peace. They died for a good course. What else can we say? The government denied these people ever existed but their blood will continue to cry. It happened before our very eyes and CNN and international organisations saw it. They reported it and Twitter was banned for it. That is the government we’re in. The panel’s report was thrown aside and trampled upon and all the huge resources used for investigations became total waste. But let me tell you something, at the appointed time, the truth of what happened at Lekki Tollgate will surface.”

Speaking on the planned memorial for the victims and whether the government would provide security for the gathering, he added, “it is an unpredictable situation. My advice to the youths is they should make up their minds to change this set of politicians . They’re free to gather and hold a memorial service for their compatriots who died fighting for a better country and a responsible government should provide security for the peaceful walk. But you never know.”

Eleveke James, a clothes trader at AMAC Market, said, “There is no atom of sincerity from the government regarding this EndSARS matter. First they denied that no one died. Can you remember when Babajide Fashola went to the scene of the event and took possession of a camera? Please what was the content of the camera? That’s what I’m saying. They set up a panel which exposed them and they thrashed the report. There is no sincerity. They have been lying to Nigerians.”

Teniola Olu, who identified herself as a businesswoman, said, “We’ll keep remembering those innocent protesters in Lagos. I was among those that protested in Abuja here. At one point the government introduced their thugs and some of us went indoors.

“This particular government has never been sincere to the citizens. You said no one died but your panel of investigation said otherwise. Instead of adhering to the report, what you did was throw it away. Now, I’m telling the youths, don’t let these politicians buy your conscience in 2023. The only way we can immortalise those killed at Lekki Tollgate is to vote in the right people to bring about the desired change.”

“As we remember those fellow patriotic citizens killed by those who were supposed to be providing security for them, we’ll never forget. We knew how it all played out. 2023 is the moment for the youths to come together and speak in one voice,” Tessy Uche, a resident of Utako said.