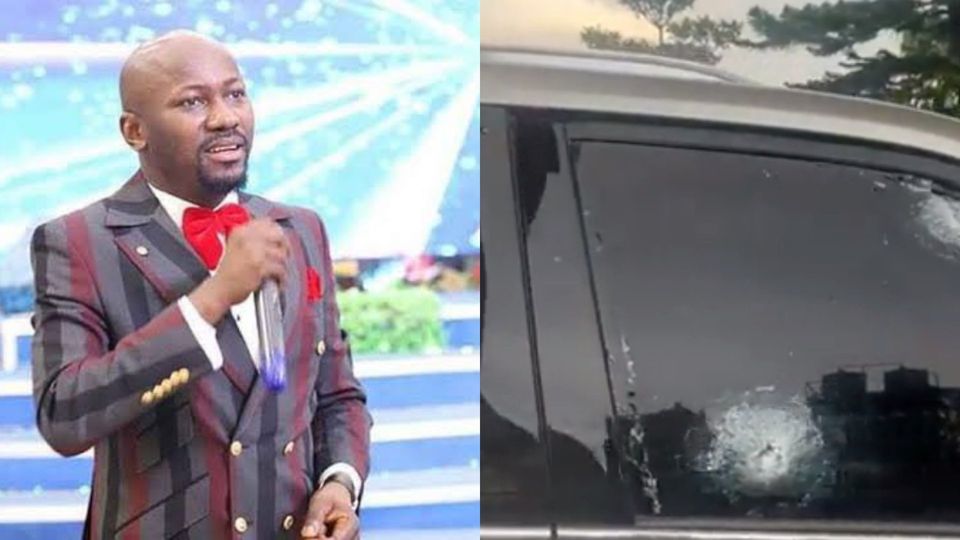 Some gunmen on Friday attacked the convoy of the Senior Pastor and the General Overseer of the Omega Fire Ministries International, Apostle Johnson Suleman, in Edo State.

Seven persons made up of three policemen and four domestic staff of fiery pastor, Apostle Johnson Suleman of the Omega Fire Ministries were killed late Friday near Auchi at the Water Tank Junction along the Warake -Auchi Road on his way to Auchi returning from a foreign mission.

Many others were also injured during the incident which happened at Warake road, close to Auchi, Edo State.

The incident reportedly happened at about 5 pm when an unidentified group of gunmen who eyewitnesses said had been in a Toyota Avalon Car and a ash coloured Sienna vehicle without number plates opened fire at the homecoming convoy of Apostle Johnson Suleman.

In what looked like an assassination attempt, eyewitnesses said the two vehicles blocked all other vehicles and maneouvered their way to meet Suleman’s convoy and opened fire on him.

His children who were said to normally travel in a separate vehicle on Friday joined their father in his car with his wife and the vehicle was targeted after Suleman’s vehicle which was leading the convoy escaped the suspected assassins.

The legal adviser to the Ministry, Sam Amune while confirming the incident said “I think it is a case of assassination attempt because the assailants who were in an Avalon and Sienna vehicles stopped other vehicles to reach Apostle Suleman’s convoy and they did not take anybody, the people just stopped and watched the drama unfolded.

‘He just finished a programme in Tanzania the day before yesterday and flew to Lagos and then to Benin where his family joined him. His children normally drive in a separate vehicle but this time they drove with their father while other domestic staff drove in their vehicle. He barely escaped death but the others were not lucky, three orderlies who normally drive directly behind him and then the next vehicle were not lucky.

“It is very unfortunate to lost those lives” Amune said.

His bullet-ridden car can be seen in this video as the voice behind the camera said, “Direct shooting…they were waiting for me.”

“Upon alarm raised, police moved to the scene, gunned down one of hoodlums and recovered one of the vehicles used.