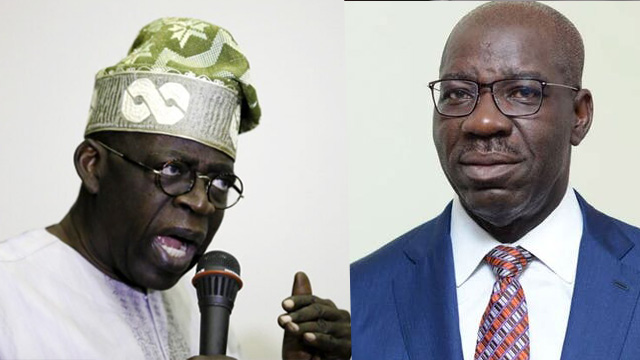 Bola Tinubu, presidential candidate of the All Progressives Congress (APC), has condemned the comments by Edo Governor, Godwin Obaseki.

Obaseki advised Nigerians against voting for Tinubu and the APC, warning that the country would break if they won the 2023 elections.

The Governor spoke at the inauguration of the Edo chapter of the Peoples Democratic Party (PDP) Presidential Campaign Council.

A statement by Bayo Onanuga, Director, Media and Publicity of the Tinubu-Shettima Campaign noted that Obaseki ridiculed his office.

Onanuga said Tinubu and Senator Kashim Shettima had demonstrated capacities and competencies as Governors of Lagos and Borno States.

He said their achievements and legacies in public service continue to stand the test of time having engineered the emergence of worthy successors.

The spokesperson accused Obaseki of recklessness and wishing the country bad because of politics.

Onanuga told the governor to stop his “scaremongering” and “the dirty gutter of bitter politicking and crisis-baiting”.

The APC insisted that Obaseki does not have any landmark achievement other than paying those on whose shoulder he rose to political relevance in Nigeria with evil.

“The energetic Governor Nyesom Wike has expressed the deepest regrets in ever helping Obaseki to retain power.

“He is a divisive, obnoxious and toxic human being that lacks introspection and contemplation expected of a person occupying the office of a governor,” he said.

Onanuga called the governor a man bereft of any iota of emotional intelligence and perhaps a misfit for the role he currently occupies.

On the claim that the federal government prints money everyday, the APC said only a disconnected and diseased mind could imagine the scenario that Obaseki concocted.