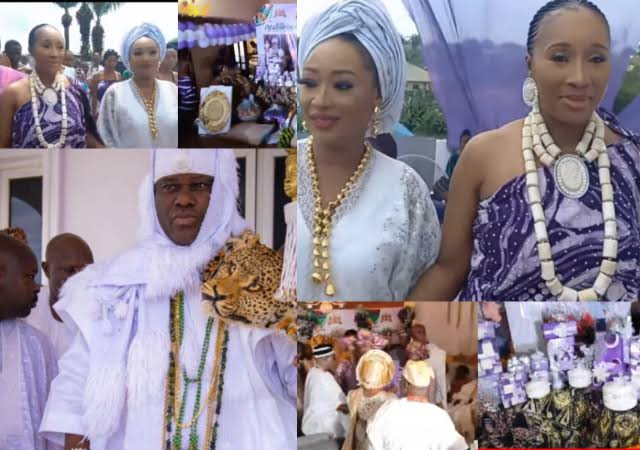 The Ooni of Ife, Oba Adeyeye Ogunwusi, has added a fifth wife to his family train. The new queen, Ronke Ademiluyi got married to the king on Thursday, October 20, 2022. This came right after the wedding thanksgiving celebration of the king’s first marriage to Mariam Anako which was held just a day before the Ooni’s 48th birthday celebration.

The Ooni marked his 48th birthday celebration in grand style on October 17, 2022. The palace was filled with much excitement as the people of Ife converged to celebrate the king in grand style and with good music.

The Ooni was flanked by Anako and attendees of the celebration as they sang songs of praises and thanksgiving to God in unison. Special prayers were later held for the Ooni while he cut his cake with his family. The queen also bestowed some words of prayers on her husband. Oba Ogunwusi married her after his marriage to Naomi Silekunola, who is a prophetess, failed in December 2021. However, since his marriage to Anako, the king has married several other queens. Society Plus takes a look at the profiles of the king’s wives. Oba Ogunwusi married Mariam Anako on September 6, 2022. She is currently the first wife of the king. Anako hails from Ebira, Kogi State. She was born in 1982 and was raised under the care of a former Inspector General of Police, Mohammed Dikko, after losing her father at a young age. Her mother is a retired police officer while one of her sisters, Medina Anako, is a lawyer and Special Adviser on Intergovernmental Affairs and Kogi State Diaspora Focal Point Officer to Governor Yahaya Bello. Her other sister, Mrs. Raliat Abdulrahman (nee Anako), is a Special Adviser to the Speaker of the National Assembly, Femi Gbajabiamila. Before her marriage to the king, she was an admin manager at Nestoil Limited. October 9, 2022, the king officially married his third wife, Tobiloba Philips. She is an ex-beauty queen who hails from Okitipupa in Ondo State. She was born on June 4, 1992. Philips also has won many in pageants in the past including, World Miss University – Africa, World Miss University -Nigeria, Miss Personality – Sisi Oge and many more. She is a Marine Sciences graduate from the University of Lagos. She is a fashion designer at QT Luxury and has been a 3D artist since 2018. Ashley Adegoke is a princess from Ile-Ife, who hails from the royal linage of Lafogido ruling house, Adagba compound. This is one of the four ruling houses in Ile – Ife, Osun State. She holds a master’s degree in Accounting and Finance from the University of Greenwich, United Kingdom. She is a member of Association for Accounting Technician, and Association of Chartered Certified Accountants in the UK.

She is also the founder of Ashley Adegoke Foundation, a charity organisation established to help improve the lives of the underprivileged. She married Oba Ogunwusi as his fourth wife on October 14, 2022. Ronke Ademiluyi is the latest wife of the king. She was married to the king on Thursday, October, 20, 2022. Born in England, Ademiluyi is the great-granddaughter of the 48th Ooni of Ife, Ajagun Ademiluyi.

She studied Law at the University of West London, UK. She is a fashion expert, entrepreneur, and the Chief Executive Officer of Africa Fashion Week which holds in London and Nigeria. Also, she is an author and cultural ambassador to the Ooni of Ife, who is now her husband.