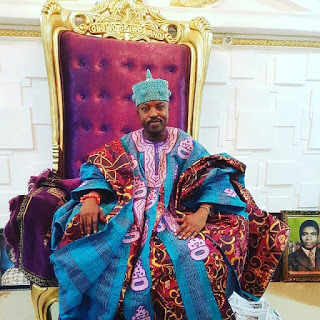 Osun monarch, the Oluwo of Iwo, Oba Abdulrosheed Adewale Akanbi has called on the Southwest governors to properly survey the forest in order to make it uninhabitable for kidnappers.

The Iwo monarch, who condemned the recent increased state of kidnappings in major roads in the southwestern Nigeria, also tasked the governors in the region to collaborate and provide surveillance aircraft to comb criminal hideouts from the forests.

The monarch, in a statement made available by Alli Ibraheem, his Chief Press Secretary on Sunday, disclosed that the forest has become a lubricating factor for kidnapping.

While praying the governors of Lagos, Osun, Oyo, Ogun, Ekiti and Ondo States to harmonize interest to dismantle the criminals’ hideouts, he enjoined them to collectively launch the surveillance.

The statement read, “Fighting insecurity is a collective assignment. The residents should not leave everything in the hands of the government. Where we are today is the responsibility of all and sundry. Finding a solution to it should also be collective. Residents must be security conscious.

“The spate of kidnapping on our highways has to be checked. Thick forests on highways are hideouts for the perpetrators. It gives them an easy ride for a successful kidnapping operation.

“One of the best solutions is to provide surveillance aircraft to comb our forests. I enjoin the governors of Lagos, Osun, Oyo, Ogun, Ekiti and Ondo States to harmonize interest and fight this menace together just as they did in the formation of Amotekun.

“As a monarch with keen interest in the affairs of my people whose lives are paramount to me, I appeal to the Chief security officers of the southwestern States to consider this option of surveillance aircraft.”