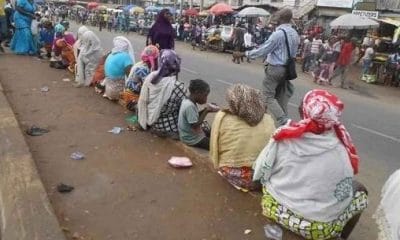 One major thing the present administration in Oyo State has done repeatedly without concrete result is the evacuation and relocation of beggars and destitutes in some parts of Ibadan, the State capital.

The investigation revealed that since the inception of the present administration in the State, evacuation of beggars and destitutes in some parts of Ibadan has been done more than three (3) times.

In October 2019, the government had announced that it had evacuated some beggars from major roads in Ibadan.

The government also in June last year said that it has commenced evacuation of beggars in major roads in Ibadan.

But, all these efforts have not yielded fruitful results as the street beggars have continued to litter and occupy some parts of Ibadan despite millions of naira that have been spent on evacuation and relocation of beggars since the administration came on board.

Findings  revealed that the beggars and the destitutes return to the areas where they were evacuated almost immediately the process is concluded.

The population of beggars, destitutes, mentally unstable people and street urchins have continued to increase in some major streets and strategic places in Ibadan, despite the government’s efforts.

Some of the areas which have been either completely or partially taken over by these categories of people are the Mokola under bridge which stretches between Ibadan North and Ibadan North West Local government areas.

The bridge was constructed in order to ease free flow of traffic around Mokola, Sango, Sabo, Queen Elizabeth Road, Adamasingba and Dugbe.

However, observed that some parts of the under bridge have been taken over by beggars, destitutes and homeless people.

A visit to the area by our correspondent revealed that the occupation of the under bridge is also responsible for traffic gridlock around the area, despite several efforts made by the State government to evacuate them.

Checks  revealed that the Oyo State government, through its ministries and agencies such as Ministry of Women Affairs and Social Inclusion and Ministry of Environment have evacuated this category of people from Mokola under bridge more than two times since the administration came on board.

But the beggars and destitutes who were evacuated recently have returned to the area in full force.

The beggars and destitutes among whom are women, men, young adults and children throng the under bridge in a bid to solicit money from commuters, arms givers and philanthropists.

They are also engaging in naira exchange business which makes commercial cab operators to patronise them.

This usually disrupts the free flow of traffic in the area, especially those coming from Sango going through Sabo, Dugbe and Queen Elizabeth Road.

What happened at Mokola underbridge is not different from what was observed by  correspondent during a visit to Jemibewon Road.

The road which is about a few metres to the Mokola barracks was constructed by Jemibewon while serving as military governor of the defunct Western State and governor of old Oyo State.

Beggars and destitutes have over the years turned some parts of the road to a business empire in a bid to receive charity and arms from philanthropists.

This development made several concerned citizens raise an alarm over the menace in the area.

The complaints received attention from the State government which necessitated evacuation of the beggars and destitutes from the area recently.

The state government has evacuated beggars from Jemibewon Road more than two times this year but it wasn’t long before they returned.

The beggars and destitutes were seen by our correspondent in the area during a recent visit.

It was observed that what happened at Mokola under bridge and Jemibewon road is not different from what is currently happening in other areas such as Bola Ige International Market in Gbagi.

The new Gbagi market as it is generally known is located along the old Ife/Ibadan Road in Egbeda Local Government Area.

Ojoo, Bodija, Sango and other major roads are not spared by the beggars.

This is despite several relocation moves done by the State government.

Some of the areas where beggars have returned are the Secretariat/UI road, Sango, Ojoo and Eleyele.

At Sango, the beggars were seen at the maiden of the dualised Sango/ Eleyele Road which is less than one kilometre to the main entrance of the Polytechnic Ibadan.

At Eleyele, they were seen at the maiden of the Eleyele-Ido Road.

Those who were seen included young children, women and adult male mostly of northern extraction.

However, all efforts made to get a reaction from the Oyo State government on the matter proved abortive.

Commissioner for Information, Culture and Tourism, Dr. Wasiu Olatubosun, when contacted, said on Tuesday to contact the commissioner for Women Affairs and Social Inclusion, Alhaja Kafayat Olayiwola for comment.

Similarly, the Chief Press Secretary to the State governor, Taiwo Adisa when contacted on Wednesday, said to contact the commissioner for comments.

Adisa said, “What you asked is not within my purview. I am aware that they have evacuated street beggars for some time. Reach out to the commissioner for Women Affairs for comment”.

It was made efforts to reach the commissioner, but the person who picked the phone on her behalf on Tuesday told our correspondent to call back.

However, an SMS sent to the commissioner to react to the matter on Wednesday has not been replied as of the time of filing this report.

“So, what do you want now? Please, call back again on Monday,” he said.