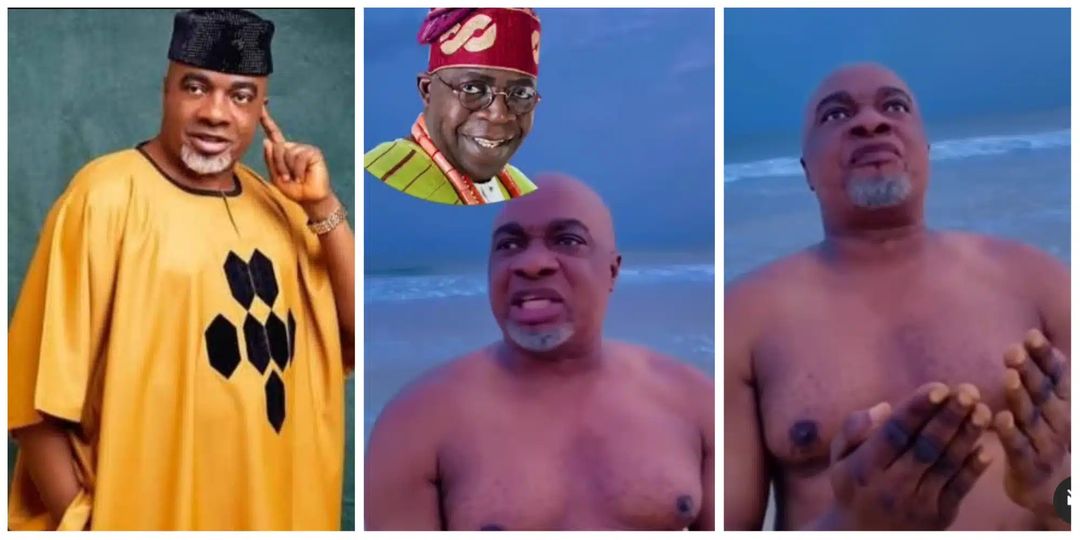 Veteran Nollywood went naked at the beach to pray for Tinubu’s victory at the 2023 poll.

The filmmaker who is known to be a big fan of the APC presidential candidate could be seen in a now-viral video praying fervently for the former Lagos State governor to emerge as the winner of the forthcoming election.

The video showed the veteran actor fully naked from behind, before turning around and was captured in a half-body shot as he prayed to the ocean for Tinubu’s victory.

Taking to his official Instagram account to post the video himself, he captioned, “It is my pleasure to support a candidate who truly reflects our values and highest ideals. There is one candidate in this election who will protect that dream.

“One leader who will fight hard to keep the promise of Nigeria for the next generation. And that’s why we must stand up and make Asiwaju Bola Ahmed Tinubu Jagaban the next president of Nigeria.”

The video has however generated reactions from social media users with many condemning the act as totally wrong, shameful and uncalled for.

Popular radio host, Dotundtun wrote on Twitter, “The video of Olaiya Igwe going butt naked is despicable and disgusting. It’s okay to support whoever you choose but even the person you are doing that for, they will be appalled by that level of filth.. your maturity should have a place in history. This is lower low ”

Another Twitter user, “AjayiKehindeTa2 ” If the video I saw recently is truly posted by Olaiya Igwe then he is a disgrace to have gone that low for whatever reason he did it. Even if he did it while acting in a movie in Nollywood this is still a shameful action. Can’t his colleagues and children talk sense to him ?”

“That Olaiya Igwe video hit me bad sha. It’s as if it’s my Dad. It hit me badly bcos I remember watching Olaiya as a kid from Ìrù Ešïn to Ti oluwa nile and hundreds of movies he’s done. So painful to see despite all those decades of hard work, he’s going naked for politics.” @AyoBankole opined.