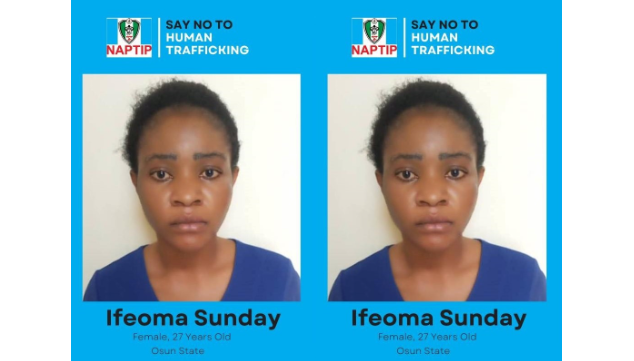 Ifeoma Sunday was given a four-month prison term for human trafficking by a Federal High Court in Osogbo, Osun State.

This information was publicly disclosed on December 7, 2022, by the National Agency for the Prohibition of Trafficking in Persons (NAPTIP).

The offence contravenes the various provisions of the Trafficking in Persons Prohibition Law Enforcement and Administration Act 2015.

“The convict – a 27 year old Female of Jumakai, Ewele, Ayepe, Osogbo was sentenced to 4 months imprisonment and asked to pay compensation to her victims, the sum of N300,000 i.e 150,000 naira each for an attempt to recruit two females to Osogbo, Osun state for exploitative prostitution.” the statement read.