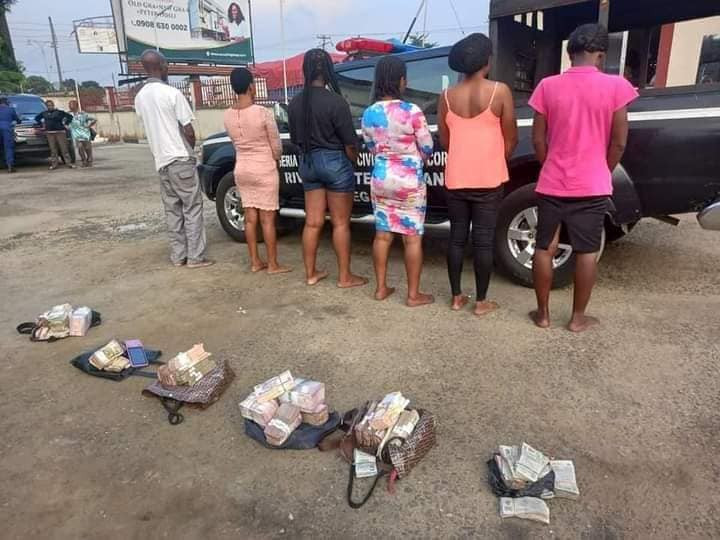 The NSCDC Commandant, Rivers State Command, Micheal Ogar disclosed this while parading the suspects and seized sums of money before newsmen on Friday, December 9, 2022.

Ogar said their arrest was made in collaboration with the men of the Department of State Services and the CBN.

“These are suspects that are involved in currency racketeering. What they have done is against the CBN Act 2007. Their activities contravene sections 20 and 21 of the CBN Act by selling naira to naira,” he said.

“You know if you go to the bank, you don’t get mints. So these people now go to the banks, they get mints, they come out and sell those mints. I want to appeal to the public to be aware that selling of the naira is prohibited by CBN Act 2007, sections 20 and 21.”

He also said the command and other security agencies would continue to clamp down on perpetrators of the offence and make them face the law.

He disclosed that while the Point of Sale machines is legal, it was against the law for operators to use it as a cover to perpetrate illegality.

“Like when people gather naira and store them in millions. Those involved shall be prosecuted accordingly, PoS machines are legal, but it is being used as a cover.

“You know when you go to the bank, tell them you are doing PoS business, they now give you money, you now go and sell the money. If you are driving a car and you decide to hit your enemy. It is legal for you to drive a car, but it is illegal for you to hit anybody pretending that it is an accident.

“So, the fact that you have a PoS does not permit you to start selling the naira notes that you got from the bank. These monies were recovered from them,” he said.

The State NSCDC boss also said the act of spraying naira notes openly at events and writing on naira notes are punishable offences.

“These operations are ongoing. We shall continue to visit birthday parties, burial ceremonies, and weddings where we find people spraying money, they shall be arrested and charged to court according to the CBN Act.’ he added.