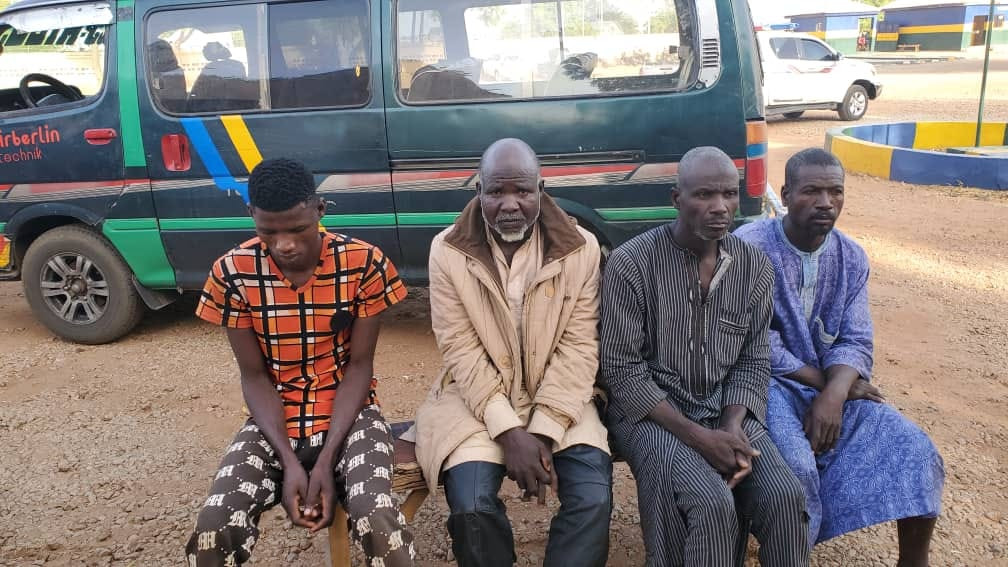 Ten people have been arrested by the Zamfara State Police Command for crimes relating to banditry, and attacks in the Zurmi and Shinkafi Local Government Areas of Zamfara State.

State police spokesperson SP Mohammed Shehu told reporters on Friday, December 9, 2022 at the command’s headquarters that officers had found two AK-47 weapons, 104 live rounds of ammunition, and a significant amount of what they believed to be Indian hemp in dried leaf form.

According to the PPRO, informers and accomplices of the alleged bandits were detained around the state.

During a confidence-building patrol along the Zurmi and Shinkafi LGAs on December 5, 2022, “Police Tactical operators received a distress call concerning bandits’ plan to attack some communities of the two LGAs,” he said.

Shehu went on to say that the agents had also detained two more alleged bandit collaborators who were experts in delivering heavy drugs and Indian hemp.

He identified the suspects as Murtala Dahiru “M,” 25, of Galadi Village in Shinkafi LGA, and Sani Mohammed “M,” 39, of Talata Mafara LGA, claiming that a sizable amount of leaf thought to be Indian hemp had been found on them.

The suspects were apprehended while transporting a significant amount of dried leaf believed to be Indian hemp from Lagos to Shinkafi in Zamfara state on December 7, 2022, at around 1200 hours. During the course of the investigation, the suspects confessed to several supply runs of hard drugs and other substances to the bandits operating at S.

He added that four more alleged bandit collaborators had been detained together with a sizable quantity of dried leaves that were thought to be Indian hemp.

The Four (4) suspects were apprehended in an 18-seater Toyota vehicle transporting a significant amount of dried leaf suspected to be Indian hemp from Lagos and to be delivered to Kaura Namoda in Zamfara state. During questioning, the suspects admitted that the consignment was intended for ba

Two alleged bandit informants who work with bandits to tax villages and give to the bandits, according to the PPRO, were detained.

One further suspect who provides information on the operational activities of security services and vigilantes was also apprehended.

The suspects are: Mohammed Sani Jibrin ‘M’ of Kekun Waje village in Bungudu LGA, Almustapha Dahiru ‘M’ of Yanbuki village in Zurmi LGA, and Abubakar Idaho ‘M’ of Kwarya Tsugunne village in Maru LGA, all of whom are 75 years old.

The first and second suspects listed above were detained by police tactical operatives in relation to working with bandits to impose levies on Kwarya Tsugunne and Yanbuki villages in Maru and Zurmi LGAs, respectively. The suspects during questioning confessed to the police that, on several occasions, they imposed levies on villagers that run into millions of dollars and delivered same to bandits while getting their percentage. They also confessed that, recently they I

The third suspect was detained on suspicion of being a bandit informant after providing details regarding the operations of security forces and vigilantes in the Bungudu LGA’s Kekun Waje village. The suspect, who was being questioned, allegedly admitted to the alleged crimes.

A spokeswoman stated, “Discreet inquiry is ongoing; upon conclusion of investigation, all suspects will be charged to court for prosecution.”