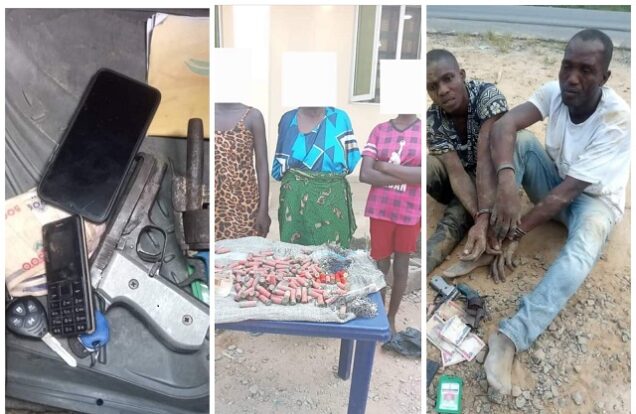 Operatives of Delta Police Command had in different operations in the past one week arrested five suspects for armed robbery, illegal sale of ammunition, while two pistols were also recovered.

Delta Police spokesperson, DSP Bright Efe who announced this in a statement on Saturday added that 130 live cartridge as well as an abandoned vehicle were recovered during the operations.

He added that the search conducted on the car and the passengers resulted in discovery of one Barreta pistol and one locally made revolver pistol.

He added that two occupants of the car Joshua Owekeof Gbulebu community in Edo State and Nicolas Binakeye of first road Akenfa in Bayelsa State were subsequently arrested.

The Police spokesperson added that exhibits and the suspects are in police custody while investigation is ongoing.

The Police spokesperson added that three members of a syndicate who unlawfully deals on sales of cartridges to cultists and armed robbers were hibernating in Boboroku community in Jesse where they carry out their nefarious activities were also arrested in another operation by operatives of the Command.

He said the suspects were arrested following a sting operation on the said hideout following intelligence on their activities.

The Police spokesperson said 130 live cartridges were also recovered from the hideout of the syndicate.

In another operation, the police spokesperson said on 6/12/2022, operatives of Eagle-net Special Squad deployed to Ughelli for the purpose of visibility policing and to complement the efforts of the Divisions in the area, received a distress call from a victim (Name withheld) that his Lexus Saloon car was snatched at gun point by three armed hoodlums and were heading towards Ughelli axis.

He added that the operatives immediately swung into action, trailed the hoodlums and their unrelenting effort paid off when the suspects on noticing that the operatives were closing in on them, abandoned the car and escaped into the bush at Ewu near Otu-Jeremi, Ughelli South LGA.

He added that the vehicle was recovered while manhunt for the fleeing suspect is ongoing.