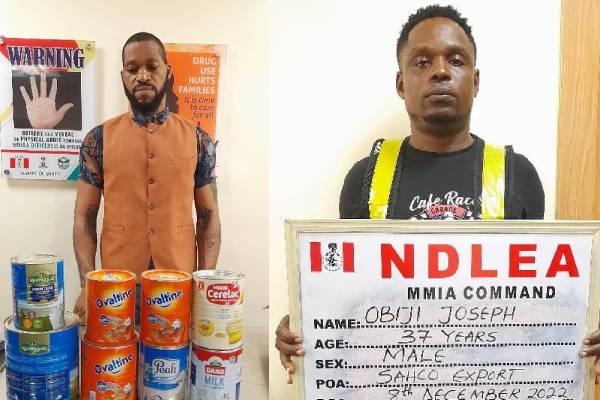 Operatives of the National Drug Law Enforcement Agency, NDLEA, at the Murtala Muhammed International Airport, Ikeja, Lagos, have intercepted parcels of cocaine concealed in different parts of a travel bag brought into Nigeria by a Brazil returnee, Nwadinobi Charles Uchemadu from Sao Paulo, Brazil via Doha on a Qatar Airways flight.

Uchemadu was arrested on Monday 5th December at the Lagos airport during inward clearance of passengers on the Qatar airways flight following the discovery of three parcels of cocaine weighing 2.70 kilograms factory sealed in parts of his travel bag.

In the same vein, parcels of cannabis weighing 6.30kgs concealed in sound systems (speakers) going to Malabo, Equatorial Guinea through the SAHCO export shed of the airport were also seized on Thursday 8th December by the operatives who initially arrested a freight agent, Joseph Obiji involved and later the following day, Friday 9th Dec nabbed another agent, Mbanu Ifeanyi Andrew in a follow up operation at ASPAMDA market, Trade Fair complex, Ojo area of Lagos.

At the Akala notorious drug hub in Mushin area of Lagos, no fewer than 15 drug dealers including two ladies were arrested with 1,400kgs of cannabis sativa among other illicit substances such as heroin, methamphetamine, and 320 bottles of codeine syrup recovered from them during a raid of the area on Friday 9th December.