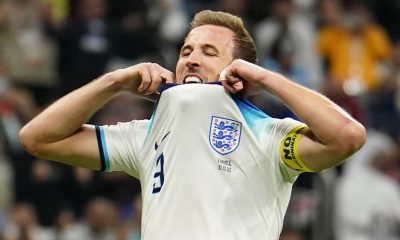 England captain, Harry Kane, has said he will have to live with the penalty miss against France in the World Cup quarter-final.

The Three Lions have been eliminated from the tournament after losing 2-1 to the holders.

Kane had drawn his side level with a successful spot kick that saw him equal Wayne Rooney’s record tally of 53 goals for England.

He then blazed the second penalty over the bar with the chance to make it 2-2 late on.

After the final whistle, Kane had be comforted by England manager Gareth Southgate.

“I’m not someone who thinks too much about it; I prepare the same whether I get one penalty or two penalties in a game.

“I can’t fault my preparation or the detail before the game; it didn’t feel any different. I felt confident taking it but didn’t execute it the way I wanted to,” Kane said.