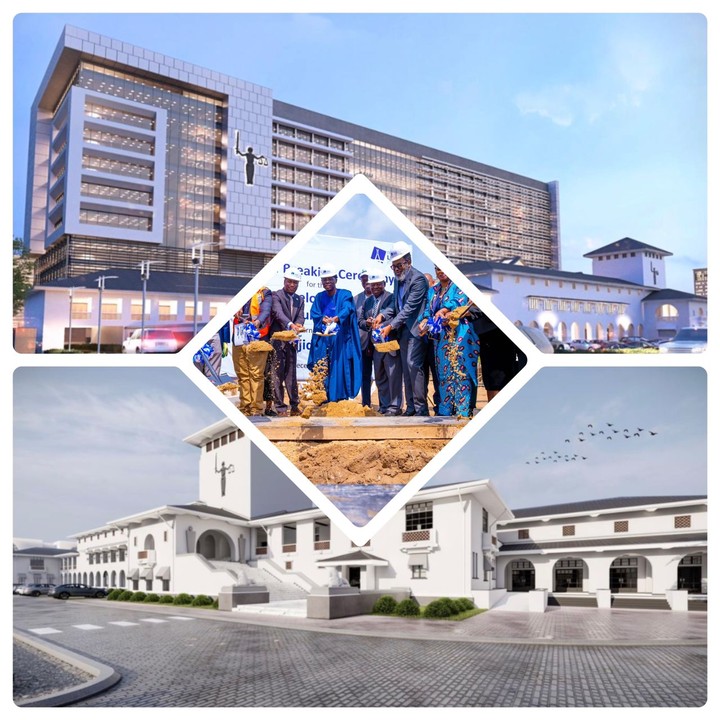 Out of the rubble of ruins, construction of a modern complex for Lagos State High Court in Igbosere has begun.

Governor Babajide Sanwo-Olu, on Monday, performed the sod turning for the redevelopment of the oldest courthouse in the country, two years after the iconic colonial vestige was razed by rampaging hoodlums in an unrest that trailed a protest in October 2020.

The courthouse is being reconstructed by Rebuild Lagos Trust Fund (RLTF) set up by Governor Sanwo-Olu in November 2020 through the Executive Order EO/BOS/2020.

The Fund is saddled with the responsibility of rebuilding and restoring all State’s assets torched in the unrest.

The Igbosere Court, one of the torched assets, dates back to the period when Lagos became the British Protectorate. It was formerly known as the Supreme Court until the relocation of Federal Capital Territory to Abuja when the court reverted to a State High Court.

Sanwo-Olu described the rebuilding effort as a “significant moment” in the administration of the justice system, noting the full restoration of the oldest judicial institution would help the State put the history of the courthouse in proper perspective.

The Governor said the Igbosere Court remained a symbolic heritage deeply ensconced in the sociology of Lagos. He assured that the courthouse would not only be restored with modernised facade to exhibit full traits of its architecture, its facilities would also be upgraded to strengthen administration of justice system.

He said: “This is a simple but significant event in the judiciary. I am humble to be performing the groundbreaking for the redevelopment of the Lagos High Court, Igbosere. We are on a journey to restore this architectural legacy, which has been part of Lagos heritage. We have put together a well-thought-out team comprising private sector professionals and Government officials to efficiently manage the Rebuild Lagos Trust Fund charged with the task to build back assets of the State destroyed by hoodlums.

“The team is to come together to advise and work with us while we continue this rebuild journey. This project is one of the several others that the Fund will be handling together. In the first phase, we will be replicating the design of the Igbosere Court and every feature of the building to recreate the facade of the old building. We are rebuilding a bigger edifice for Lady Justice. The courthouse will be brought back to life to ensure we have smooth dispensation of justice for our citizens.”

Sanwo-Olu maintained that Lagos had no hand in the event that led to the razing of the courthouse and other State assets, stressing that the State had put the emotions behind the dark event and looked ahead to build a city where wheels of justice would not be placed out of the reach of all citizens.

The new courthouse, the Governor said, would give judges and judicial officers ample space to work, while maintaining the independence of the judiciary.

He said: “We are here to let people know that we have put the emotions behind us. We are forward-looking people. This event further confirms the strong spirit of Lagos and the resilience of the city, which explain our ability to withstand shocks and build back better.

“We will never allow the forces that razed the building to win the battle. That is why we are publicising the reconstruction of the Igbosere Court to let the whole world know and show our resilience. We will be turning this bad situation to positive development.”

The Fund’s Board of Directors chairman, Mr. Olayemi Cardoso, said the Igbosere Court was the significant institution among the six pioneer projects identified by the Fund, given its historical significance to Lagos and the country.

The Fund, he said, remains dedicated to its restoration and upgrade.

“In the first phase, we will rebuild the old court structure, upgrade it to a state-of-the-art facility, and restore the artefacts that are signatures of its history. The second phase of this project will be a multi-story and multi-purpose structure to resolve space constraints and will feature additional office spaces, courtrooms, parking spaces, as well as giving room to future expansion,” Cardoso said.

Lagos Commissioner for Justice and Attorney General, Mr. Moyosore Onigbanjo, SAN, said October 2020 would remain a sad day in the history of the Judiciary, noting that the torching of the court was a “fatal breach” in the temple of justice.

He said dispensing justice was not about brick and mortar, but an idea which could not be killed by destruction and desecration of the temple.

“This redevelopment will raise from the ashes a more beautiful court complex than the one destroyed. With this event, light has overcome darkness,” Onigbanjo said.

Chief Judge of Lagos, Hon. Justice Kazeem Alogba, recalled the last judicial activity in the courthouse before it was razed, noting that the Governor had a plan for massive renovation of the High Court before the incident.

Despite the large scale destruction wreaked on the structure, Alogba said the statue of the Lady Justice conspicuously placed at the entrance of the High Court was not torched and also the statues of lions.

The Chief Judge said the redevelopment effort was a manifestation of the beginning of nature’s plan for the oldest court building in the country.

To eliminate car-parking challenges around the court, a multilevel park would be built in the new complex and a 700-seater auditorium.