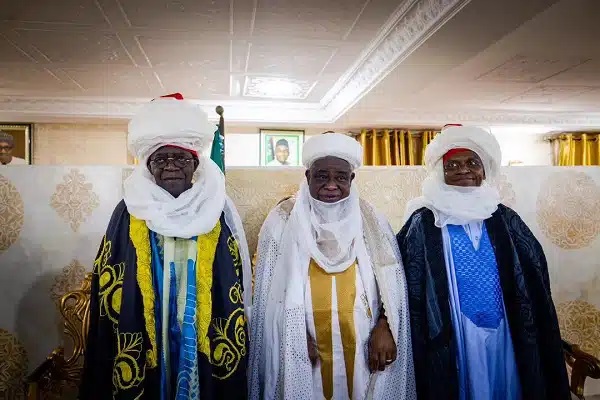 At the monarch’s palace, Tinubu donated 50 million naira to cushion the effect of bandits’ attacks on residents of the community.

Bola Tinubu, the presidential candidate of the All Progressives Congress (APC) has been given a new chieftaincy title in Birnin Gwari community of Kaduna State.

Tinubu was on Monday turbaned as Dakaren Birnin Gwari (the Dakaren title means the Fearless Warrior) by the Emir of Birnin-Gwari, HRH Zubair Jibril Megwari II, at his palace.

The former Governor of Lagos State had visited the town to commiserate with the victims of bandits’ attacks which took place last week.

At the monarch’s palace, Tinubu donated 50 million naira to cushion the effect of bandits’ attacks on residents of the community.

Tinubu assured the people of Birnin Gwari that he will tackle the problems of insecurity, road infrastructure decay, agriculture, education, and other challenges in the area if elected President in 2023.

He also appealed to them to vote for APC in the state in order for his administration to be able to fulfill the promise of bringing development to Nigeria.

In his remark, the monarch appreciated Tinubu for his donation and for being the first presidential candidate to visit the community.