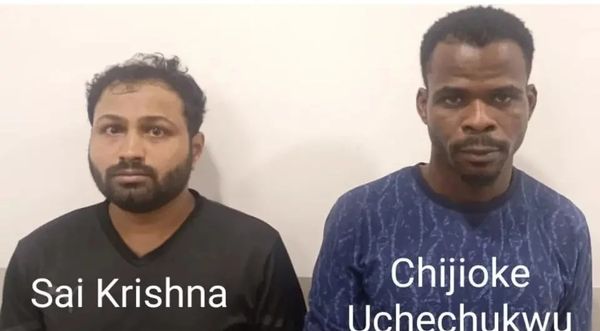 Police in Hyderabad, India busted an international drug trafficking ring, and two people, among them a citizen of Nigeria, were arrested.

The two suspects were detained on Tuesday, December 20, 2022, as part of a joint operation by the Special Operation Team (SOT) of the L B Nagar zone and the Neredmet police.

They were found to be in possession of 30 grams of methamphetamine (MDMA) and other items worth Rs 6 lakh.

The Nigerian national Chijioke Uchechukwu, often known as Peter, was discovered to be residing in India illegally in 2015 despite having a valid visa at the time.

The other accused identified as Seelam Sai Krishna of Manikonda, worked as a freelance US recruiter. The third accused Chijioke Okordo, who is currently absconding, is stated to be in Mumbai.

Both the peddlers were caught red-handed by police while they were waiting near RK Puram bridge in Neredmet to hand over the drugs to customers. 30 grams of Methamphetamine was seized from their possession.

The police said Chijioke Uchechukwu popularly known in the drug market as Peter confessed that he had recently purchased the drugs from Okordo and brought them to Hyderabad for the new year.

After meeting Chijioke at an OYO hotel in Manikonda six months ago, Sai Krishna, a B.Tech dropout, started supplying synthetic narcotics with him.

Chijioke arrived in India in 2014 on a student visa to pursue computer courses in Mumbai. In 2017, he came into contact with a drug dealer there, and that same year, the Pune police arrested him in an NDPS case and sent him to prison, according to Rachakonda police commissioner Mahesh M Bhagwat.

In August 2022, Chijioke came in contact with the third accused in the case, Okordo, who paid him Rs. 10,000 to supply the drugs to people in Mumbai and Pune, Bhagwat added.

“Our Special Branch (SB) officials are constantly monitoring the activities and visa and educational details of the foreigners. Several foreigners have already been deported due to overstay,” Mahesh Bhagwat said.

The arrests were made under the direct supervision of Rachakonda police commissioner Mahesh M Bhagwat, Deputy Commissioner of Police (DCP) Malkajiri, K Rakshitha K Murthy and under the guidance of DCP, SOT, Rachakonda Muralidhar and other senior officials.