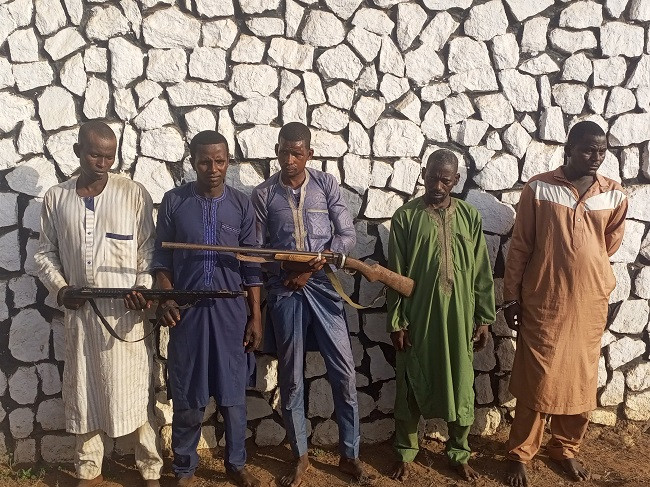 Five suspected kidnappers have been arrested by anti-kidnapping operatives of the Kwara State Police Command.

The five suspects belong to two separate gangs of kidnappers.

Members of the first gang include Babagida Buguda, 30, described as a kingpin, Bashiru Yakuba, 35, and Mohammed Umaru, 26.

Parading the suspects at the state police command headquarters in Ilorin on Wednesday, the state Police Commissioner, Paul Odama, said they were arrested on December 20, 2022, in Oro-Ago, Ifelodun Local Government of the state.

According to the police boss, exhibits allegedly recovered from them included two locally made guns and two mobile phones.

According to Odama: “On 9th November 2022, at about 5:45 pm, one Mr Shina Luke Abiodun of Eruku town in Ekiti Local Government Area of Kwara State, and one other, while riding on a motorcycle on their way from Egbe in Kogi State were accosted at Koro village close to Eruku town by men numbering about six, who emerged from the bush armed with guns and other dangerous weapons.

“The hoodlums opened fire on them and they sustained gunshot injuries. They, however, escaped the attack and ran to the Anti-Kidnapping patrol team stationed at Eruku town.

“The team moved to the scene and one Tecno phone was recovered. Forensic analysis of the phone by the investigators led to the arrest of the kingpin and two of his gang members in Oro-Ago, Ifelodun LGA, Kwara state on 20th December 2022.”

The police commissioner said the suspects confessed during interrogation to have been responsible for kidnapping operations within Ekiti, Kogi and Kwara states respectively.

“One of their victims and his six-year-old son came from Ekiti State to identify and confirmed that they were kidnapped and held captive for six days by the suspects and were released after payment of N6m.

“The suspects also confessed to have also killed one Inspector Segun Ayegbulu of the NSCDC attached to Ekiti Command,” the police commissioner added.

He said further Investigation into the matter led to the recovery of two locally made pistols, while efforts are also ongoing to arrest the fleeing members of the gang and recover the remaining firearms in their possession.

According to the account of the Police Commissioner: “On 12th December 2022, intelligence available to the command indicated that one Abubakar Mohammed, 15, was kidnapped along Oke-Ode – Share road, Ifelodun LGA, Kwara State.”

The report prompted the Commissioner of Police to dispatch a team of State Intelligent Bureau (SIB) and conventional Police from the Oke-Ode Division.

A diligent investigation led to the arrest of Garuba Abubakar aka Elero of Lokongoma village and Abubakar Adam of Ile Nam Oke-Ode, Ifelodun LGA, Kwara State who are members of the kidnap gang.

He disclosed that they confessed to having collected the N500,000 ransom paid by the victim.

CP Paul Odama added that the leader of the gang, identified as Chairman Rabiu who is presently at large, is said to be in possession of the gang’s firearm and always took custody of all ransom collected as confessed by two arrested suspects.

Efforts are in top gear to get him arrested, while all the suspects would soon be charged to court soon, he stated.

The police commissioner who vowed that the command will make Kwara State uncomfortable for criminals advised them to leave the state.