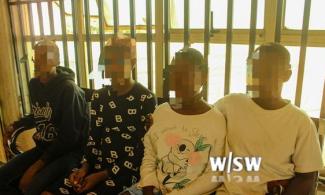 Four young girls, ages 13 to 15, were rescued from a human trafficker 48 hours before Christmas by the Anambra State Government through the Commissioner for Women and Social Welfare, Ify Obinabo.

According to a statement released on Saturday by the Anambra State Ministry of Women and Social Welfare, the girls, who are all from Akwa Ibom State, were saved on Thursday night during a combined operation with the Anambra State Police Command.

The operation was sequel to the information made available to the commissioner about the crime, during which her team and the security operatives arrested and arraigned suspect in court on Friday.

The rescued teenage girls who narrated their experiences said that they were taken by one auntie Success who told them that she had a job opportunity for them in Agbor, Delta state where they would be selling drinks in a beer parlour but on getting there, they discovered that it was prostitution work they were brought to do.

According to them, about five different men did have carnal knowledge of them every night.

The victims further said that their skimpy clothes were bought from the proceeds too according to what they were told, pointing out that they have made several attempts to escape but were punished severely when one of the other girls reported their plans to Madam Success.

They said that after the punishment they were taken to a herbalist who forced them to take an oath that they would never run away or die.

The teenagers lamented that it was in their quest to secure their school fees that they got lured into the act but appreciated the effort of the state Commissioner for women and social for coming to their rescue and giving them shelter.

After her arrest, the suspect was arraigned before the Children, Sexual and Gender Based Violence Magistrate court in Awka where the court denied her bail and committed her to prison custody.

Reacting to the incident, the commissioner, Obinabo reiterated the state government’s resolve in ensuring that human traffickers are not pampered in the state.

She warned that the Prof Chukwuma Soludo-led administration would not leave any stone unturned in making sure that traffickers are dealt with according to the stipulations of the law urging members of the state to always report any suspicious activity within their area.