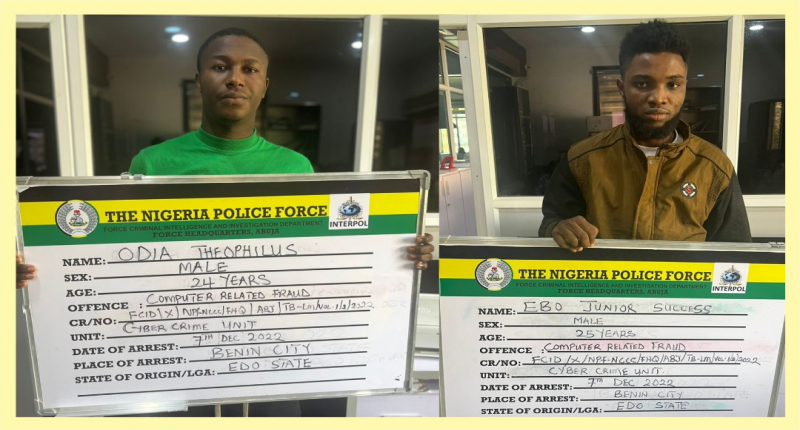 The two, according to a police statement, operate a syndicate that specializes in robbing unwitting victims from other nations by adopting alluring identities of other people and promising them love relationships, which they then use as a cover to defraud their victims.

The statement released by the spokesperson for the force, Olumuyiwa Adejobi, added;

“In the extant case, a report on their activities was received from Incheon Metropolitan Police Agency in Korea through the Interpol National Central Bureau that in May, 2021, the suspects approached the victim, one Baek Seong-hee, a Korean national, via Kakaotalk, a mobile messaging application used majorly in South Korea, in the guise of being a member of the US Armed Forces stationed in Yemen. The suspect used the pretext of a romantic relationship and defrauded the victim of 259,637,941 Korean Won (KRW) worth of cryptocurrency equivalent to about 91 million Nigerian Naira.

“Subsequent investigations led the NPF-NCCC to the arrest of the duo of Odia Theophilus aged 24 and Ebo Junior Success aged 25 at their hideout in Benin City, Edo State. The suspects confessed to being part of a syndicate responsible for these crimes and stated their roles as accomplices who provide bank accounts for fraudsters in furtherance of their nefarious activities.

“The Inspector-General of Police, IGP Usman Alkali Baba, psc(+), NPM, NEAPS, fdc, CFR, has lauded the efforts of the Head, NPF-NCCC, DCP Uche Ifeanyi Henry, in ensuring a clampdown on cybercrime related offences. The IGP similarly extolled the collaboration being enjoyed with other police agencies worldwide via the Interpol NCB platform stressing its importance in tackling transnational crimes.

“Suspects will be charged to court upon conclusion of investigations.”