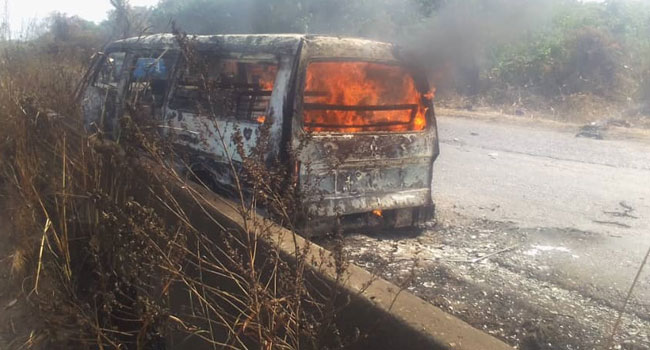 Seven passengers have perished been in accident along the Sagamu-Benin Expressway, emergency officials said on Wednesday.

The accident occurred at the Odogbolu junction of the expressway after a Mazda bus – with registration number AGL 886 YD – suddenly went up in flames due to engine oil overflow.

The Traffic Compliance and Enforcement Corps (TRACE) confirmed the latest accident to journalists in Abeokuta.

TRACE spokesman, Babatunde Akinbiyi, said seven others sustained varying degrees of injuries in the lone accident that occurred around 2:50 p.m.

He explained that the victims were worshippers travelling from the Kosofe area of Lagos State inbound Epe, for a church revival.

Giving a breakdown of the victims, Akinbiyi said the passengers were 15 people, comprising one male adult and 14 females. However, only the driver of the bus escaped unhurt.

“According to eyewitness accounts, the bus burst into flames suddenly due to engine oil overflow,” he said.

“The number of passengers in the commercial bus was 15, out of which seven females were burnt to death, while the remaining seven were seriously burnt and taken to Ijebu-Ode General Hospital for treatment. The accidented Mazda bus has been taken to Odogbolu Motor Traffic Division.”