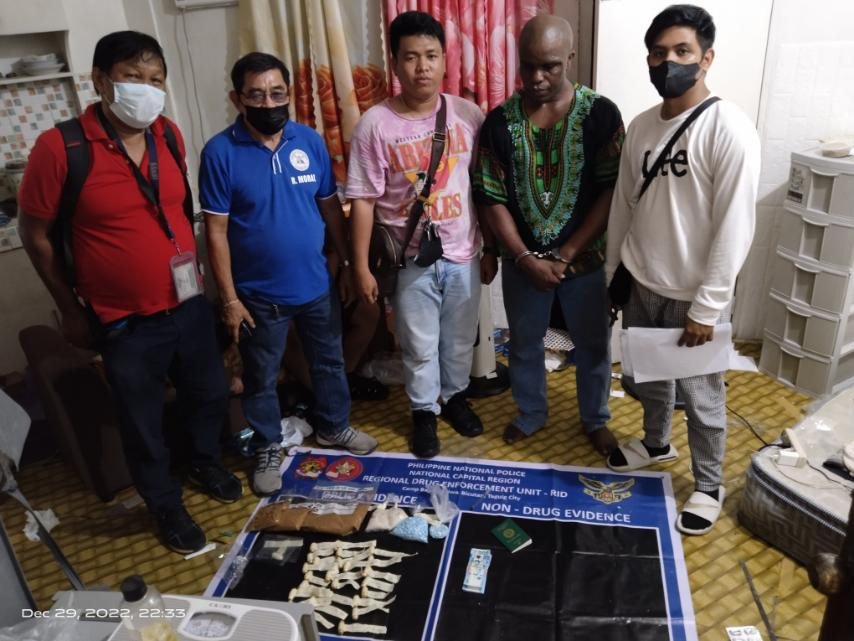 A 36-year-old Nigerian man, Nnaemeka Nwoke alias Eggy, has been arrested by the police with over N40m worth of drugs in Las Piñas City, in the Philippines.

The Regional Director of the National Capital Region Police Office (NCRPO), Maj. Gen. Jonnel Estomo said the suspect is believed to be linked to the West African Drug Syndicate (WADS).

Nwoke was arrested after he tried to sell illegal drugs to undercover police officers during a bust led by the Southern Police District (SPD) on Thursday, December 29, 2022, inside a subdivision in Barangay (village) Talon 5.

Seized from his possession were suspected ecstasy tablets, shabu (crystal meth), and cocaine.

The NCRPO said Nwoke is now detained at the SPD headquarters pending the filing of complaints for violations of Republic Act No. 9165 or the Comprehensive Dangerous Drugs Act of 2002. The pieces of evidence meanwhile were turned over to SPD’s Crime Laborator

“As Team NCRPO enhances its battle against the proliferation of illegal drugs in Metro Manila through the S.A.F.E. NCRPO program, we are very proud of the continuous achievements of the schemes being implemented in arresting drug personalities and confiscation of huge amount of illegal drugs,” Estomo said.

“We cannot let drug syndicates most particularly from foreign drug cartels to feast on the detriment of our countrymen especially our youths. We assure our countrymen that these kind of people will not escape the fangs of the law,” he added.

Below are full details on the drugs seized from the suspect:

A. One (1) knot-tied transparent plastic bag containing 100 pieces of color blue skull-shaped tablet suspected to be ecstacy; (With a total DDB value of ?170,000.00)

B. One (1) unsealed transparent plastic bag containing 532 pieces of color blue skull-shaped tablet suspected to be ecstacy; (With a total DDB value of ?904,400.00)

F. One (1) unsealed transparent plastic bag containing one (1) piece of white elongated hard (compressed) substance suspected to be cocaine with approximate weight of 12.5grams; (With an estimated DDB value of ? 66,250.00)