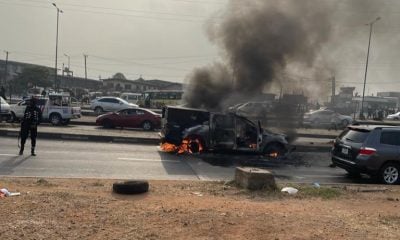 One person died yesterday and two police officers sustained injuries from gunshots following a bloody clash between the Yoruba Nation agitators and men of the Nigeria Police Force in the Ojota area of Lagos State.

The clash was said to have ensued after persons masquerading as Yoruba Nation agitators disrupted social and commercial activities in the ever busy area of Lagos.

According to the state police spokesman, SP Benjamin Hundeyin, a team of police officers comprising the Alausa Division and the Raid Respond Squad (RRS) promptly stepped in to disperse the unlawful gathering and prevented a breakdown of law and order.

“The miscreants attacked the police, fired gunshots, and destroyed two vehicles. One person has been confirmed dead, while two police officers shot by the miscreants are currently receiving treatment,” he added.

However, normalcy has since been restored to the area.

The police urged residents to go about their lawful businesses.

“Measures have been put in place to prevent further breakdown of law and order, and keen monitoring of the situation continues,” he said.

The PPRO, however, warned that the State Police Command would not allow any person or group of persons, under whatever guise, to disrupt the peace currently enjoyed in the state.

Meanwhile, the Aare Ona Kakanfo of Yoruba land, Chief Gani Adams, has denied report that members of the Oodua Peoples Congress (OPC) was involved in a clash against the Yoruba Nation agitators at Ojota.

Similarly, the President of the Dr. Frederick Fasheun faction of the OPC, Wasiu Afolabi, has distanced the socio-cultural organisation from the unrest that reportedly broke out in Lagos, yesterday.

Speaking against the backdrop of the information making the rounds that members of the OPC were part of the groups that organised the rally, Adams, in a statement by his Special Assistant on Media, Kehinde Aderemi, said the Ojota rally came as a surprise, and it kept everybody unaware, adding that none of his members were part of the crisis.

“Let me clear the air on the crisis that had engulfed Ojota this morning. There were unconfirmed reports linking members of the OPC to the mayhem. I want to state it clearly that none of our member were at the scene of the incident.

“Our position on regionalism is very clear. It is sacrosanct, because that is what we are seeking at the moment.

“Nigeria should be restructured to full regional autonomy, where each region will be at liberty to operate at their own pace.

“It is unfortunate that the report was done in bad faith to discredit our organisation. How can people be so mean to spread such sensitive information that OPC attacked the Yoruba nation agitators?

“Such information was wicked, mischievous, and uncalled for and could trigger crisis and cause unnecessary disaffection between the OPC and sons and daughters of Yoruba race,” he added.

Also, Afolabi, in a statement signed by Bunmi Fasheun, said the organisation’s initial investigations showed that no member of OPC was involved in the disturbance, “of today Monday and none had fallen casualty by omission or commission.”

However, Afolabi seized the opportunity to demand that the government must ensure freedom for the 31 victims kidnapped on Sunday by Fulani bandits at the Igueben train station in Edo State.

“There is absolutely no reason to associate OPC with what happened today in Ojota, Lagos. People were simply talking from the figment of their imagination. Just like any other person, we heard news of the disturbances through the social media. When I made phone calls to my members around the axis and elsewhere, they said they knew nothing about the crisis,” he said.

“Nobody should drag OPC into a matter that does not concern us and today’s problem is none of our business,” the OPC president said.

According to Afolabi, OPC stands for a peaceful resolution of all Nigeria’s question.

“We took to the streets in 1994 to press for the exit of the military and the enthronement of democracy. We have since won democracy. Now we believe that resolution of national questions should come through dialogue. There is nothing that cannot be tabled for discussion,” he said. “And we will be the last to cause a breakdown of law and order, especially in our home constituency anywhere in the South-West and adjoining states.”

“We are watching the development in Edo State with keen interest. Edo has a sizeable number of OPC members. And we feel it is insulting, unacceptable and provocative for foreign elements to continue to kidnap Nigerians and make our rural areas unsafe for law-abiding citizens,” Afolabi added.

He urged the security agencies to ensure that the kidnapped victims were recovered and their abductors brought to answer for their crime in the court of law.