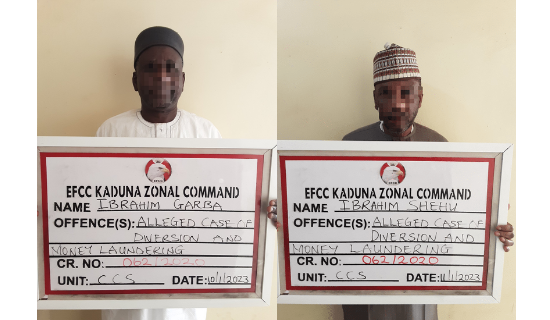 Professor Ibrahim Garba, and Ibrahim Shehu Usman, former Vice Chancellor and Bursar respectively of the Ahmadu Bello University, Zaria were arraigned before Justice A.A Bello of the Kaduna State High Court on an eight count charge bordering on theft and money laundering to the tune of over N1billion.

The duo was arraigned by the Kaduna Zonal Command of the Economic and Financial Crimes Commission, EFCC on Thursday, January 12, 2023.

The arraignment followed months of discreet investigation triggered by a petition accusing the duo of diverting monies meant for the renovation of the popular Kongo Conference Hotel, Zaria.

The investigation established that over one billion Naira was allegedly stolen from different accounts of the institution by the defendants and diverted into their private accounts.

Count one of the charge reads, “that you, Prof. Ibrahim Garba and Ibrahim Shehu Usman, sometimes in December, 2013, whilst the Vice Chancellor and Bursar of Ahmadu Bello University, Zaria respectively, in Kaduna within the jurisdiction of this Honourable Court conspired amongst yourselves to use the aggregate sum of N998,000,000.00 (Nine Hundred and Ninety Eight Million Naira), property of the Ahmadu Bello University, Zaria”.

Another count reads, “that you, Prof. Ibrahim Garba and Ibrahim Shehu Usman, between 2015 and 2016 in Kaduna, whilst the Vice Chancellor and Bursar of Ahmadu Bello University, Zaria respectively, with dominion over the sum of aggregate sum of N173,428,020.00 (One Hundred and Seventy Three Million, Four Hundred and Twenty Eight Thousand, Twenty Naira), committed Criminal Breach of Trust in respect of the said sum through USIG NIGERIA LIMITED account No. 1402548014, domiciled in First City Monument Bank Plc”.

They pleaded ‘not guilty’ when the charges were read to them.

Based on their plea, the prosecuting counsel, N. Salele and M.U Gadaka urged the court to fix a date for the commencement of trial, while the defence counsel M.S Kati asked the court to release his clients on bail.

Justice Bello granted bail to the defendants in the sum of N10 million each and a surety in like sum who must own a landed property within the jurisdiction of the court.

They are also to deposit their international passports with the registrar of the court.