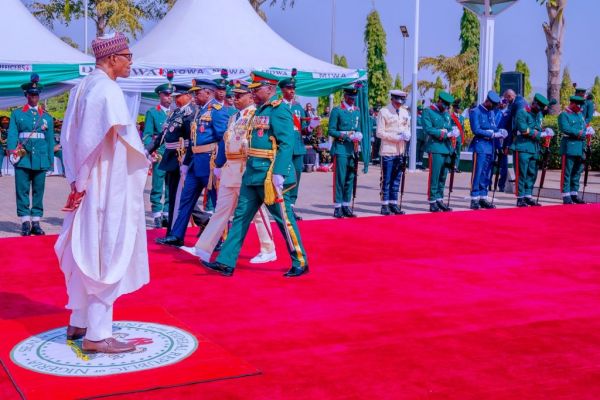 President Muhammadu Buhari has led other senior members of the government to the National Arcade in Abuja to participate in the Wreath Laying Ceremony, marking the climax of the 2023 Armed Forces Remembrance Day celebration.

The event held on Sunday, January 15, 2023, honours the memory of the nation’s fallen heroes, and it is marked across the federation with activities, including religious services, parades, and wreath-laying ceremonies.

The President, who arrived at the National Arcade at 10:05 am, was immediately ushered onto the saluting dais for the National Salute.

He also inspected the Guards of Honour, accompanied by the Commander, Brigade of Guards, Major General Muhammad Takuti Usman, after which he proceeded to the Cenotaph for the Wreath Laying Ceremony.

Others who laid wreaths were the pair of the Ministers of Defense and that of the Federal Capital Territory (FCT), Major General Bashir Magashi and Mallam Muhammed Musa Bello, respectively; the Chief of Defence Staff, General Lucky Irabor and the service chiefs and well as the Inspector-General General of Police, Usman Alkali Baba; representatives of members of the Diplomatic Corps; and the pair of the Chairman of the Nigerian Legion and a widow of a fallen officer.

The 2023 wreath laying ceremony will be President Buhari’s last as Commander-in-Chief.

Also in attendance were members of the Federal Executive Council, including the Secretary to the Government of the Federation, Mr Boss Mustapha; the Chief of Staff to the President, Professor Ibrahim Gambari; the National Security Adviser (NSA), Major General Babagana Monguno (rtd), other ministers; Permanent Secretaries; amongst others.

Meanwhile, the APC presidential candidate said that the Armed Forces have remained a great shield that has consistently fought against any threat to national security and peaceful coexistence.

Tinubu, in a statement issued yesterday by his Media office, gave the assurance in a message of commendation and gratitude to members of the Nigerian Armed Forces on the occasion of this year’s Armed Forces Remembrance Day.

The Armed Forces Remembrance Day is celebrated on January 15th of every year to remember veterans and honour the sacrifices of members of the Armed Forces.

The APC presidential candidate said that the Armed Forces have remained a great shield that has consistently fought against any threat to national security and peaceful coexistence.

He said: “The nation owes members of the armed forces – past and present – a huge debt of gratitude for keeping the country together as one” and defending its territorial integrity even at the risk of their lives.

“It is praiseworthy that despite the many threats and challenges faced by the nation at different junctures of her history, the Armed Forces have remained a great shield that has consistently fought against any threat to national security and peaceful coexistence.

“As we celebrate this year’s Armed Forces Remembrance Day on January 15, I want to place on record our deep appreciation of the services of our Armed Forces men, past and present.

“I want to assure our veterans and those in active service that if elected president I will join hands with them in ensuring that Nigeria defeats every threat to her nationhood.”

Tinubu reiterated that his administration would adequately support them and prioritize their welfare and equipment needs among other empowerment initiatives as already enumerated in his Action Plan.