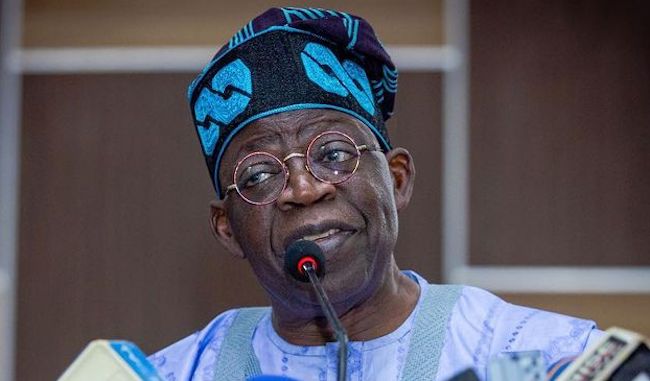 Economic experts have said Nigeria cannot continue on the path of indebtedness amid incompetence and inefficiency.

Recall that Tinubu remarked in his interaction with business stakeholders, in Lagos, that budget deficits are not necessarily bad.

However, Nigeria’s rising debt profile has been a source of apprehension for many economists and ordinary Nigerians.

Certainly, for a country struggling on all fronts, a N77 trillion debt if the National Assembly approves President Muhammadu Buhari’s 23.7 trillion Ways and Means advance, according to the Debt Management Office, DMO recent statement, should raise dust.

With the country’s dwindling revenue portfolio and overbearing debt repayment burden, the fear continues to escalate.

In perspective, a breakdown of this year’s appropriation bill with N21.51 trillion expenditures and expected revenue of N9.73 trillion, shows that a whooping N6.31 trillion representing over 70 per cent of its aggregated revenue would be gulped by debt servicing and shooting up the country’s budget deficit to N10.78 trillion.

In plain economics, Nigeria’s debt situation does not look good.

He stated that the budget deficit is causing Nigeria double digit inflation and depreciation of naira.

He added that historically, the budget deficit has not been productive because some of the projects financed by it are not economically viable. He cited Nigeria railway currently crippled by insecurity as an example.

“The deficit financing has consistently weakened the Naira and has led rating agencies to downgrade Nigeria’s credit rating, thereby affecting flow of investment opportunities and ability of the private sector to source funding from foreign institutions.

“The deficits spending by Nigeria cannot be said to be totally productive because some of the infrastructural projects financed by the government are not commercially viable projects that can repay the loans used to fund them.

“A major example is the railways which have been rendered unproductive by insecurity that has affected their operations.

“Continuous deficit spending by the government would leave the government unable to undertake key social and infrastructural projects in the long run”.

He said it was not good for a country to use a larger part of her income (revenue) on debt serving, as it is the case of Nigeria.

Also, he disclosed that the country’s budget deficit on recurrent expenditure would only plunge her unborn generation into debt trap.

He said the budget deficit becomes laudable if it is meant to finance capital expenditures.

“Yes, the budget deficit is not bad at all. My stand has always remained that the country shouldn’t use a larger part of her income to pay debt, that is where the problem comes. Another problem is how sincere are the government deficits in terms of budget? We are having a deficit where recurrent expenditure is not lower than the capital expenditures. It means we are going into debt to make a certain class of Nigerians to be wealthy. It won’t be an issue if most people in the economy are productive. You pay a salary for a job for twenty people instead of two people.

“We are deficiting on inefficiency and incompetence. Such will not develop the economy. If the budget deficit is on capital expenditures, this will bring about future cash flow into the economy. If the Central Bank of Nigeria’s 23 trillion ways and means is added, Nigeria’s debt profile would hit N77 trillion, this means that generations yet unborn will be using their income to pay the debt of their fathers who decided not to take governance seriously,” he lamented.